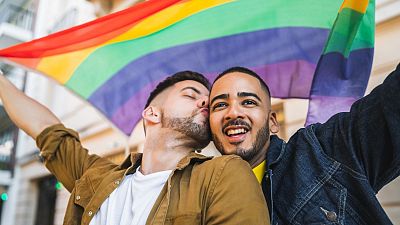 Although remote working is an increasingly accessible option for many, there are still restrictions around the world for LGBTQ+ people.   -   Copyright  Canva
By Marthe de Ferrer  •  Updated: 19/06/2021

With remote working increasingly becoming the new norm and travel restrictions gradually lessening, many people are starting to rethink where they base themselves.

Living as digital nomads is set to be on the rise as we come out of lockdowns across Europe, with countries like Croatia and Curaçao offering incentives to lure remote workers.

But for members of the LGBTQIA+ community, it’s not always as simple as choosing the sunniest or cheapest destination. Anti-LGBT legislation is still being introduced across Europe (and elsewhere), meaning the path to digital nomad life isn’t as clear-cut as it is for straight and cisgender travellers.

In light of this, we’re going to be revealing the best cities around the world for LGBTQIA+ digital nomads - places with inclusive practices and progressive laws.

Small Business Prices has researched destinations, assessing cities on their legalities around civil partnership, same-sex marriage, and public acceptance, while also considering the average monthly wages and cost of living.

Where is best for LGBTQ+ remote workers?

The Spanish capital is the second-best place to live as an LGBTQ+ digital nomad. According to the survey, 86 per cent of the population are supportive of LGBT rights. This level of support actually places the city ahead of the overall winner, and only behind Amsterdam (92 per cent) from the rest of the top 10 rankings.

It’s perhaps no surprise that a Spanish city ranks so highly, given the country’s strong overall support for LGBTQ+ rights over the last few decades especially. Discrimination laws protecting LGB people have been in place since 1995, and legislation supporting transgender rights (particularly around the right to self-identify) are some of the most progressive in the world.

The tiny European country of Luxembourg comes out on top in this ranking. Its high average salary, combined with its widespread acceptance (85 per cent of residents) of LGBTQ+ culture and marriage, secures the city as the best place for digital nomads to live.

Though the average cost of living is quite high (€2,636/month), it is offset by the impressive average salary (€3,943/month). The country was an early adopter of civil unions in 2004, before legalising same-sex marriage in 2015.

After Luxembourg and Madrid comes the New Zealand capital Wellington - the highest-ranking non-European city on the list.

Though support for LGBTQ+ rights and culture is comparatively low (63 per cent), it’s still high when considered on a global scale - and the high monthly salary against the low cost of living secures the Kiwi capital a top 3 finish.

Where is best for LGBTQ+ nightlife?

The study didn’t just look at cost of living and public support, however. There are separate rankings for city nightlife - especially important as we come out of lockdown and clubs begin to open again.

Tokyo takes the top spot for nightlife, with over 60 LGBTQ+ friendly bars and pubs - roughly 0.44 per capita (especially impressive when you consider how many people live in the Japanese capital).

Berlin and London round out the top three, just pipping Madrid and Mexico City to the podium.

Here are the capital cities with the best LGBTQ+ nightlife:

The full study can be found here.

Get into beach-based working with these 7 digital nomad destinations