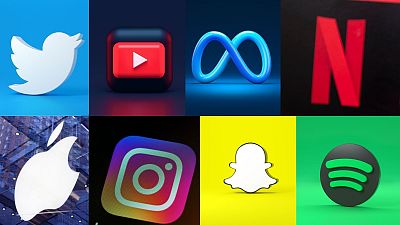 From social media giants to chipmakers and video game publishers, a growing number of tech companies are halting business with Russia in response to its invasion of Ukraine.

More than 400 companies have announced their withdrawal from Russia since the start of the war, according to a tally by Professor Jeffrey Sonnenfeld and his research team at the Yale Chief Executive Leadership Institute.

Here’s an overview of what the main tech companies have announced so far. The list is growing and will be regularly updated.

The US chipmaker disclosed on March 16 that it had already stopped selling its products to Russian companies in compliance with US sanctions against Moscow.

The move was made public when Qualcomm replied on Twitter to a post by Ukrainian vice prime Minister Mykhailo Fedorov urging the company to "stop all operations and supplies" in Russia.

"We have stopped selling products to Russian companies & comply with US sanctions," Qualcomm tweeted.

The rival US chipmaker announced on March 3 it had halted shipments of its products to customers in Russia and Belarus, adding: "Intel condemns the invasion of Ukraine by Russia".

The video game companies have all said they will no longer sell their games and content in Russia.

Sony's PlayStation unit has halted all sales of its consoles and software in Russia and cancelled the launch of its racing game Gran Turismo 7, while the PlayStation Store will no longer be available in the country.

"Sony Interactive Entertainment joins the global community in calling for peace in Ukraine," the company said on March 9.

For Electronic Arts (EA), which owns the FIFA franchise, the embargo includes games, add-on content, and virtual currency bundles, which will no longer be available in Belarus either.

The Alphabet-owned company said on March 10 that YouTube and Google Play were suspending all payment-based services in Russia, including subscriptions, causing a sudden loss of income for Russian YouTube creators.

Google had earlier banned Russian state media outlets from running ads on its platforms, blocked mobile apps connected to media outlets RT and Sputnik from its Play store, removed the publishers from Google News, and banned them from YouTube across Europe.

It has now suspended all its monetisation features, including YouTube Premium, Channel Memberships, Super Chat and Merchandise, for viewers in Russia.

Like Apple, the company has also disabled some live traffic and incident features from Google Maps in Ukraine. Its Search and Maps tools in the country now also point to United Nations resources for refugees and asylum seekers.

The tech giant said on March 7 it had halted all business in Russia, and that its teams had set up an interactive map connecting IBM workers and contractors fleeing Ukraine with company colleagues in Europe able to assist them with housing, transportation, or supplies.

The cryptocurrency trading platform has blocked over 25,000 addresses related to Russian individuals or entities it believed to be engaging in illicit activity, and defended itself against claims that Moscow could dodge international sanctions using crypto.

Microsoft said on March 4 it was suspending all sales of its products and services in Russia over what it described as the country's "unjustified, unprovoked and unlawful invasion" of Ukraine. The software giant also pledged to help defend Ukraine against Russian cyberattacks.

Earlier that week, Microsoft said it would not display any content from state-backed Russia media outlets RT and Sputnik, that it would de-rank their search results on Bing and would stop all advertising deals with them.

The network equipment maker says it has indefinitely suspended all business operations, including sales and services, in Russia and Belarus.

In addition, the company says it's automatically renewing software and services for its Ukrainian customers at no charge and helping the country protect its critical services from cyberattacks.

The online payments company shut down its services in Russia on March 5 after it stopped accepting new users in Russia earlier in the week.

A company spokesperson told Euronews Next at the time that PayPal would continue to process customer withdrawals "for a period of time, ensuring that account balances are dispersed in line with applicable laws and regulations". The company would not give a specific deadline.

Apple has paused all sales of its physical products in Russia, restricted Russian access to digital services including Apple Pay, and blocked RT News and Sputnik from its App Store outside of Russia.

In Ukraine, the company also disabled both traffic and live incident features in its Apple Maps "as a safety and precautionary measure for Ukrainian citizens," amid fears that Russia could target specific locations using these tools.

Meta announced on February 28 that Facebook pages and Instagram accounts belonging to RT and Sputnik would no longer be accessible within the European Union.

On March 4, Russia's national telecommunications regulator hit back by blocking access to Facebook in the country, in response to what it called "discrimination" against Russian state media.

On March 14, Russia also blocked access to Instagram after Meta said it would temporarily allow social media users in Ukraine to post calls for violence against Russian invaders.

Meta has since clarified that policy, saying it was "never to be interpreted as condoning violence against Russians in general", and that it would not allow posts calling for the death of Russian president Vladimir Putin or other heads of state.

Twitter has also taken down the accounts of RT and Sputnik in Europe, in line with an EU ban on the Kremlin-backed news outlets that came into effect on Wednesday.

These two Twitter accounts are now inaccessible across the bloc’s 27 member states.

Instead, a message shows up stating “account withheld”. The EU has accused both state-run media outlets of spreading harmful disinformation across social media.

The company has also pledged $15 million in humanitarian aid to Ukraine.

"We stand in solidarity with our Ukrainian team members and the people of Ukraine who are fighting for their lives and for their freedom," it said in a statement.

The online travel agent and the home rental firm have both halted operations in Russia.

Airbnb is now also waiving guest and host fees on all bookings in Ukraine, and thousands of people with no plans to visit are using the platform to send money to besieged locals, along with messages of support.

Netflix has halted its service in Russia. The streaming service has also paused all future Russian projects and acquisitions, and four original series have been indefinitely put on hold.

"Given the circumstances on the ground, we have decided to suspend our service in Russia," a Netflix spokesperson said on March 6.

The audio streaming giant has closed its Russian office indefinitely and removed all content from Russian state-owned media outlets RT and Sputnik, over what it called Moscow's "unprovoked attack on Ukraine".

The Finnish network equipment maker said on March 1 it would stop deliveries to Russia to comply with sanctions imposed on the country. Nokia normally supplies MTS, Vimpelcom, Megafon and Tele2 in Russia.

"Our view is that the safety of our employees is paramount," a Nokia spokesperson told Euronews Next.

"We do have some manufacturing in Ukraine in the west of the country, also very close to the Hungarian border. We are actively monitoring the situation and we already have contingency plans in place to use if needed".

The Swedish telecom giant has also decided to suspend all deliveries to customers in Russia while it reviews the situation in Ukraine.

"We are deeply concerned about the situation in Ukraine and are following developments closely. Our priority is to ensure the safety of our people there. We are also in regular contact with our customers to ensure operational contingencies in what is a very dynamic situation," a spokesperson told Euronews Next.

Business software giant Oracle tweeted on March 2 that it had "already suspended all operations" in Russia after Ukrainian vice prime minister Mykhailo Fedorov called on the company to stop doing business in Russia "until the conflict is resolved".

Oracle’s German rival SAP has also said it’s halting all sales of its products and services in Russia.

“Like the rest of the world, we are watching the war in Ukraine with horror and condemn the invasion in the strongest possible terms,” the company said in a blog post on March 2.

Kaspersky could be used in cyberattacks in Europe, German agency warns