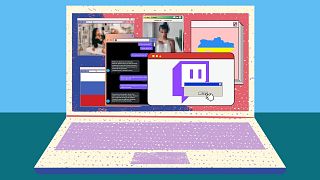 OnlyFans said it had restored Russian and Belarusian creators' accounts after a pause prompted by "financial restrictions"   -   Copyright  Euronews Next graphic via Canva
By Tom Bateman  •  Updated: 10/03/2022

Anna Mukydza first noticed something was wrong with her OnlyFans account when the Russian adult content creator received a message from a subscriber telling her he wasn't able to pay.

"People could not renew their subscription, and once it was time to renew it was automatically rejected and people were unsubscribed," she told Euronews Next.

Mukydza is one of many OnlyFans creators in Russia and Belarus whose accounts were suspended in the wake of Russia's invasion of Ukraine. Like many others, she uses the platform to produce and sell adult content, which she says accounts for up to 40 per cent of her income.

A few days later, her account was back. But it came at a cost: Mukydza estimates she lost around a quarter of her subscribers and around €1,000 in sales.

"The biggest question for me is that they do not ban Russian users, they only ban Russian creators," she said.

"So do they think that government leaders have OnlyFans and post their dick pics and monetise it? Or is it for Russian leaders, [so] that they can't see my nudes anymore?"

In a statement, OnlyFans said it had restored its Russian creators' accounts. The platform said the hiatus came after the country's financial institutions were hit by sanctions that limited their ability to process international transactions.

"We were not terminating or suspending any creator accounts based on the creator’s location, and we are doing everything we can to support our community," the company said.

But after OnlyFans provided its statement to Euronews Next, another creator, Sophia*, sent screenshots from the OnlyFans app appearing to show that her Russian ID was rejected by its verification process due to being from "a prohibited country or state".

They say that they have no claims against us, but they take away my only source of income

Unable to verify her identity, Sophia lost subscribers and was unable to manage her page on the platform. She was also unable to withdraw her earnings, she said - OnlyFans' terms of use grant the platform the ability to withhold earnings "indefinitely".

"I had been planning to emigrate since the beginning of last year, after the rallies that were brutally suppressed and after [Russian opposition leader Alexei] Navalny was imprisoned," she said.

"I have to withdraw $200, I understand that for some it is a small amount, but for me it is still money," she told Euronews Next.

Russian and Belarusian workers on other platforms have also had their livelihoods disrupted by the impact of sanctions.

On March 1 the CEO of Estonian rideshare firm Bolt announced an immediate halt to the company's operations in Belarus, saying it stood against the invasion.

At the time Bolt pulled out of Belarus, it had drivers numbering "in the thousands," the company told Euronews Next.

"Coming from Estonia we know the value of freedom all too well," Bolt’s chief executive Markus Villig wrote, referring to the country's occupation by the Soviet Union that ended in 1991.

Then, on March 5, Amazon-owned streaming service Twitch sent its Russian creators an email explaining that they would no longer be able to receive payouts to Russian bank accounts.

"I read it and I couldn't believe it," a Russian Twitch streamer who asked to remain anonymous told Euronews Next.

"I have been streaming on Twitch for the past five years," she said. "Twitch has always been my home, my safe place. A place full of happiness, video games, laughter and a great time".

It was also a major source of income, the streamer said. But when third-party payment processor PayPal as well as Visa, Mastercard and American Express also left Russia, they took with them any hope of getting paid.

"I don't think Twitch is evil. Sanctions have left them literally no choice," she said.

"Unless Twitch can pay out in crypto, which I doubt will ever happen, the only way for them is to hold all of the payouts for Russian streamers until they can pay them again one way or the other".

'People are losing their jobs'

For the Russian OnlyFans creators Euronews Next spoke to, the unstable situation caused by the war has revealed the risks of working on a tightly controlled international platform.

If I were them, I wouldn't want that money to go towards supporting cruelty, pain and death of innocent people

"I don't believe any further claims from this platform anymore. They say that they have no claims against us, but they take away my only source of income," Sophia said.

The Twitch streamer told Euronews Next she understood why so many western companies had chosen to cut ties with Russia after it invaded Ukraine.

"McDonald's [which announced it would close its 850 Russian restaurants] alone pays $147 million (€132 million) of taxes to the Russian government yearly. If I were them, I wouldn't want that money to go towards supporting cruelty, pain and death of innocent people," she said.

"However, we all need to understand that those companies also provide employment to tens if not hundreds of thousands of Russian people. People are losing their jobs and a way to make whatever money in the times you need it the most".

Mukydza told Euronews Next she had received support from other OnlyFans creators abroad, but that her experience with the platform had left her feeling depressed.

"I was doing my OnlyFans for eight months straight without any vacation or days off and then suddenly they decided to stop it. It affected my motivation. I was feeling like a worthless person, doing my page for nothing," she said.

"At the very end I hope there are people who can separate war from the adult industry. I don't do any dumb crowdfunding goals for a nuke or whatever," she said.

*Euronews Next is not using Sophia's real name.