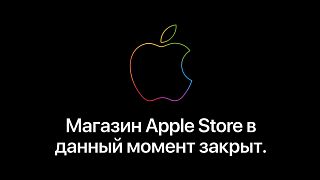 "We are deeply concerned about the Russian invasion of Ukraine and stand with all of the people who are suffering as a result of the violence," Apple said in a statement. "We are supporting humanitarian efforts, providing aid for the unfolding refugee crisis, and doing all we can to support our teams in the region."

Apple's move means that people in Russia will no longer be able to purchase items like iPhones or Macbooks direct from the company. When Euronews Next attempted to buy an iPhone on Apple's online store for Russia, the site displayed a message reading "The Apple store is currently closed".

The halting of physical sales in Russia follows an earlier move by Apple to stop exporting its products to Russia last week. Apple had already restricted access to digital services including Apple Pay within Russia.

"RT News and Sputnik News are no longer available for download from the App Store outside Russia," the company said, adding that it had disabled both traffic and live incidents in Apple Maps in Ukraine as a safety and precautionary measure for Ukrainian citizens.

What are thermobaric rockets, Russia's most fearsome weapons?

What part is Anonymous playing in Ukraine’s war effort against Russia?