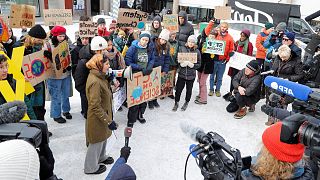 Activism is a strong response to the climate crisis. But many people feel frozen by their fear, or want to fly away from the problem.   -   Copyright  REUTERS/Arnd Wiegmann
By Jessica Kleczka  •  Updated: 24/01/2023

Climate denial is one of the biggest threats to meaningful action and this is by design.

Fossil fuel companies have spent millions on lobbying politicians, advising their PR teams to sow uncertainty about irrefutable science, and refusing to change their business models. This is all despite knowing the effects of burning their products since the 1960s.

To this day, the industry has a huge presence at climate summits like COP27 where fossil fuel lobbyists outnumbered almost every national delegation. Governments also continue to accept generous donations from sceptics and fossil fuel interests, and subsidise the gas and oil industries.

I encounter climate deniers all the time on social media, as some of my work is in science communication and public advocacy.

A lot of them are automated bots. Others are angry men stuck in polarising media cycles, many with industry interests and affiliations, who see advocating for a liveable planet as “woke propaganda”.

Both groups are vocal minorities and neither are worth wasting much energy on.

Everything you know about climate denial is wrong

The most common form of climate denial is not the aggressive kind, but passive denial. This is from people who are very aware that climate change exists, they just don't care much about it or avoid the subject altogether. We call them 'dismissives.'

Some climate deniers are people you wouldn’t expect, such as those who belong to groups which will be heavily affected by rising temperatures.

Climate deniers are victims, not villains

Your average climate dismissive is not an evil business mogul looking to squeeze as much profit as possible before the world burns. And I believe that we are often on the wrong track when we demonise people for not believing in “the whole global warming thing”.

My academic research focuses on climate anxiety, and I find that climate denial often stems from a fear of change and what the climate crisis will mean for our lives, livelihoods and lifestyles.

Because climate change can seem too enormous of a threat to tackle as an individual, hostility is instead directed towards those advocating for climate action.

Humans have evolved to engage in a fight-flight-freeze response whenever we’re faced with a threat.

Humans have evolved to engage in a fight-flight-freeze response when we’re faced with a threat. While some respond to the climate crisis by fighting it (for example, by engaging in activism), many experience a freeze response (fear and inability to act), or indeed a flight response - avoiding the problem altogether.

While it can feel counter-intuitive, meeting climate dismissives with compassion can go a long way and help them break free from denial.

The key is to help people understand that runaway climate change poses a much bigger risk than pretty much any alternative.

Delay is the new denial in climate

Climate deniers are arguably a dying breed these days. A mere 4 per cent of people in the UK, for example, report not feeling at all concerned about the crisis.

But a new and insidious tactic is threatening to undermine our efforts to build a more sustainable future: climate delay, spearheaded by the fossil fuel industry and politicians with links to it.

Julia Steinberger, Professor of Societal Challenges of Climate Change at the University of Lausanne, has studied the forms that delay takes. Redirecting responsibility is one of the four main tactics that she and colleagues have identified; with people shifting the blame away from governments and polluting industries and onto individuals.

Others are pushing non-transformative solutions, in particular technologies like carbon capture or storage which are as yet unproven to be effective at scale.

Focusing on the negatives of climate action has also gained in popularity. Some claim, for example, that “shifting away from fossil fuels will make people colder and poorer” while ignoring the devastating impacts of failing to do so.

Many fossil fuel companies engage in a tactic coined wokewashing - exploiting communities of colour, who are disproportionately impacted by fossil fuel pollution, in their advertising. Often these ads will imply that better living conditions in countries such as India are only possible with the help of Shell and co - perpetuating white saviorism and imperialism.

Lastly, surrendering to doomism is often framed as “adapting to climate change” or “accepting the inevitable” and plays directly into the hands of those most responsible for climate change, while the most affected communities are left to fend for themselves.

Though we must learn to validate our climate-related feelings, it is crucial to understand that giving in to doomism means betraying people around the world for whom climate change is an acute and life-threatening danger.

We can lean into and process our fear and anxiety, whilst channelling our pain for the world into action.

So how do we combat delay and denial?

Many people don’t see the climate crisis as something that’s immediately relevant to their life.

In my research with Imperial College and the charity Greener & Cleaner, we found that identifying the issues that are important to people and using them as a first point of engagement is often more effective than bombarding people with scary data about an issue that can often feel distant.

Instead of climate change, it can sometimes be more effective to talk about air pollution, access to green spaces, or the cost-of-living crisis.

Another component of effective climate change communication is speaking to people’s values.

As Katharine Hayhoe writes in her great book Saving Us, “the biggest challenge we face is not science denial. It’s a combination of tribalism, complacency, and fear”.

She cites research which found that people’s attitudes to climate change are most strongly correlated with their values, worldviews and political orientation, rather than education and knowledge.

Challenging people’s sense of belonging, or even attacking them on a personal level for their climate-avoidance, is only likely to increase their defences. Meeting people where they are is more likely to lead to success, together with reducing psychological distance to an issue which often seems far away from our daily lives and struggles.

Hayhoe gives the example of explaining the impacts of drought and chaotic weather to farmers, without mentioning the word ‘climate’.

Climate change: Just talk about it

Finally, we must reconsider the way we communicate the climate crisis.

Many news stories frame the climate crisis in terms of imminent apocalypse and societal breakdown. While we must acknowledge these very real threats, the reality is that most people feel demotivated and terrified when encountering doomist headlines, resulting in a flight or freeze response.

Perhaps counterintuitively, our brains have evolved to pay more attention to negative information - though fear-based approaches are effective in getting people to feel concerned in the first place. But research shows that we are most motivated to take action when we see solutions, hope, and perhaps most importantly, others taking action.

Rather than climate denial, our biggest challenge is climate delay and dismissiveness at a time when taking bold and ambitious action is crucial. The reality is that most of us are concerned about the climate crisis and want to do something about it; but most people don’t know where to start.

As climate-aware people, reaching out and offering guidance is often all it takes to break through the defences. And the best way to achieve this is to simply talk about the climate crisis - at work, in schools, at the dinner table. By normalising climate conversations, we encourage more healthy emotional responses.

Rather than sowing seeds of fear and polarisation, encouraging vulnerability and hope in equal measure is how we motivate people to take action for a better future.

The EU countries using the most (and least) renewable energy