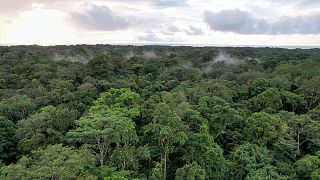 Trees - like these in a Gabonese rainforest - are largely to thank for current levels of carbon dioxide removal.   -   Copyright  REUTERS/Christophe Van Der Perre
By Lottie Limb  with Reuters  •  Updated: 19/01/2023

About two billion tonnes of carbon dioxide are being removed from the atmosphere every year, scientists have calculated for the first time.

But nearly all of it is down to forests, despite growing investments in new technologies.

The University of Oxford led report is the first to assess how much CO2 removal the world is already achieving - and how much more is needed.

Writing in CarbonBrief today, the authors describe the 2bn GtCO2 estimate as “small” relative to current CO2 emissions of 36.6 GtCO2 per year from fossil fuels and cement. But add the figure is “perhaps larger than many might expect.”

The report finds that roughly 1,300 times more carbon dioxide removal from new technologies - and twice as much from trees and soils - are needed by 2050 to limit global heating to well below 2C, as set out in the Paris Agreement.

"CO2 removal is rapidly moving up agendas," says report co-author Steve Smith, a climate scientist at the university. But despite growing interest and investment, he points to major gaps in information about the climate solution.

What are the biggest CO2 sinks?

CO2 removal (CDR) involves capturing the greenhouse gas from the atmosphere and storing it for a long period of time either on land, in the ocean, in geological formations or in products.

To date, 99.9 per cent of successful CO2 removal has been achieved through what the scientists call “conventional CDR on land.” This includes creating new forests, restoring previously deforested ones, better managing soils and using more durable wood products.

How much is the world counting on carbon removal tech?

From 2020 to 2022, global investment in new CO2 removal capacity totalled around $200 million (€185m), according to the report, while some $4 billion (€3.7bn) has been funnelled into publicly-funded research and development since 2010.

Although countries aren't currently planning to use CO2 removal to meet short-term climate goals by 2030, many envision it as part of their strategy for reaching net zero by 2050.

Report co-author Jan Minx, of the Mercator Research Institute on Global Commons and Climate Change in Germany, said that while reducing emissions remains the top priority for reaching the Paris goal, "at the same time, we need to also aggressively develop and scale up CO2 removal, particularly those novel methods."

He added that would take time as "we are still at the very start".