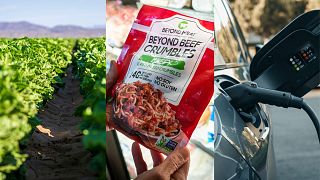 Experts have identified three solutions that could speed up climate action.   -   Copyright  Canva and Levine-Roberts/Sipa USA via Reuters Connect
By Rosie Frost  •  Updated: 20/01/2023

Tipping points are usually bad news. They’re points in time when humans will no longer be able to control the impacts of climate change, a runaway train to disaster.

But new research has flipped this on its head, naming three small interventions that could trigger a cascade of decarbonisation and may be the fastest way to drive global action.

These positive tipping points could have a snowball effect in a good way, drastically cutting carbon emissions in some of the world’s most polluting sectors.

Positive tipping points give us ‘plausible grounds’ for hope

The report, launched at the World Economic Forum in Davos earlier this week, says that together the three tipping points would cut emissions in sectors that cover 70 per cent of global greenhouse gas emissions.

“We need to find and trigger positive socioeconomic tipping points if we are to limit the risk from damaging climate tipping points,” says Tim Lenton, a lead author of the report.

He adds that thinking about the problem in this non-linear way gives us “plausible grounds” for hope.

“The more that gets invested in socioeconomic transformation, the faster it will unfold - getting the world to ‘net zero’ greenhouse gas emissions sooner.”

What is a ‘positive tipping point’ for climate change?

At a positive tipping point, new zero-carbon technology advances to the point where it is better and more competitive than older more polluting versions. This then causes a feedback loop where the new solution becomes more accessible and cheaper while the old technology declines.

The report's authors say this has already happened in the electricity sector where wind and solar made up more than 75 per cent of the new energy generation capacity in 2022.

“With time running out, there is a need for action to be targeted,” says Mark Meldrum from sustainable consultancy firm Systemiq, which produced the report with the University of Exeter.

“Each super-leverage point crossed raises the chance of crossing others, and could set off a cascade of positive tipping points to steer us away from a climate catastrophe.”

They have identified three “super-leverage points” - easy, low cost changes that would have the biggest impact on decarbonisation.

What are the three ‘super leverage points’?

These three solutions were identified based on where a small intervention could have the biggest impact. They wouldn’t just cut emissions in one sector but could also support more rapid changes in other parts of the economy.

A tipping point for road transport is already very close. The cost of electric vehicles is falling and charging infrastructure is improving, making them ever more attractive for consumers and manufacturers.

The cost of lithium batteries in particular has dropped by 90 per cent in the last 10 years, the report says. And boosting EVs to 60 per cent of global car sales by 2030 could drive down battery prices even more - helping to reduce costs in the wind and solar industry along the way.

To reach the tipping point, the report says mandates need to be introduced which require zero-emissions vehicles to be an increasing proportion of manufacturers’ car sales. This would bring down costs and increase demand.

They note that versions of policies like this have already been successful in California, China and some Canadian provinces.

Using the purchasing power of public institutions like hospitals, schools and governments to buy plant-based proteins could be a “powerful lever to increase uptake of these products,” the report says.

In the UK and EU, public institutions make up around 5 to 6 per cent of food sales - enough to have a “material” impact on the sector. This solution could also help change people’s opinions on plant-based proteins, encouraging them to move away from animal products.

Plant-based proteins produce around 90 per cent fewer emissions than meat. Reducing meat consumption would cut emissions from farming as well as free up land used for agriculture to help wildlife and carbon capture.

Decreasing demand for animal protein could also remove some of the incentives for deforestation.

Most fertilisers are made with ammonia which is produced using natural gas, leading to around 1.8 per cent of global emissions.

But this ammonia can also be made using hydrogen produced with clean energy, thereby cutting emissions.

The report suggests that if governments required just 25 per cent of the ammonia in fertilisers to come from green hydrogen, it could have a massive impact. Demand for the equipment used to produce this hydrogen would increase, speeding up its growth and making it cheaper.

It would then also bring down costs for other industries hoping to use green hydrogen to reduce emissions such as steel production and shipping.