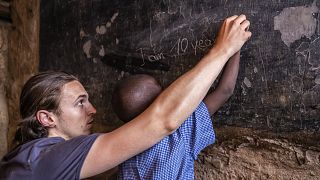 Social media can be an educational tool. TikTok in particular has been praised for providing an accessible platform to young POC and activists who use the app to educate their peers about politically sensitive, and complex, issues such as Indigenous human rights abuses in the West.

But there is a concerning trend of videos that perpetuate the “white saviour complex”. A phrase that refers to a white person who acts to help non-white people, but in a context that can be perceived as self-serving or promotional.

In these videos young affluent Westerners travel to impoverished countries to take photographs of themselves feeding or clothing desperate families, who would otherwise be bound to destitution.

One such “voluntourist” is a wealthy young man from France named Dylan Thiry. His videos “working” in former French colony Madagascar have gone viral in recent years. They show him providing poor communities with basic essentials such as food, water and clothing.

Thiry has become somewhat of an internet sensation, amassing millions of followers from his pictures and videos of charitable actions.

But the mainly Black people in his videos remain nameless, presented as “others” and commodities for likes and shares.

The local community becomes part of the photographic landscape and their individual stories are lost to a Western-centric saviour narrative.

The white saviour complex is a big issue as it individualises the concept of poverty and blurs the difference between charity and solidarity. It also implies that dependency on white benefactors is the key to surviving, rather than economic freedom and all that comes with it.

It individualises the concept of poverty and blurs the difference between charity and solidarity.

So why is this content becoming so popular on social media?

Accounts such as Humanitarians of Tinder and Barbie Savior have been highlighting the growing trend of white westerners using photographs of themselves surrounded by people of colour, while volunteering on dating websites and social media, for years now.

According to academics Colleen McGloin and Nichole Georgeoui, the experience of interacting with local cultures and communities has now been commodified.

What was once a selfless act of serving developing areas has now become a commodity that can be purchased in hopes of achieving greater leverage in the employment market and in society.

“What was once a selfless act of serving developing areas has now become a commodity that can be purchased in hopes of achieving greater leverage in the employment market and in society.”

So what is the science behind the success of this obviously problematic content?

In part, it’s to elicit praise from their peers for their selfless actions. But there is a science behind why people are motivated to post this kind of stuff.

Research has discovered that social media users post more frequently if they feel excited after receiving likes and comments. As white saviour content becomes more popular, creators will be encouraged to post more, and viewers who see this content will feel (chemically speaking, due to the dopamine released) good. This encourages them to post the same content to get the same response…and so it goes.

You might be thinking, why does this really matter in the grand scheme of things? There’s plenty of unsavoury content online, so what makes this any different?

Well, this content perpetuates the myth that poverty is a problem to be solved by the rich world; rather than a phenomenon that is, in large part, produced by rich countries: their predatory financial institutions, rapacious corporations, and neo-colonial foreign policies.

It implements and upholds a colonial pecking order.

It also implements and upholds a colonial pecking order, with mainly white teenagers being told that their limited experience is somehow better than that of bonafide professionals in the country they volunteer in, simply because they come from the Global North.

Academic Robtel Neajai Pailey terms this as international development’s “white gaze” phenomenon, where whiteness is seen as a signifier for progress, modernity and expertise, and the standard against which non-white people are judged.

These videos present a story that all communities in the Global South are unable to support themselves, which we know isn’t the case.

They’re struggling under structural and systematic barriers that no one person can solve, no matter how much they might genuinely want to.

So how is this ending up on my TikTok feed?

Popular white saviour content is often boosted by something called collaborative filtering. This is how TikTok’s algorithm recommends new accounts based on whom the people who follow that user are also following.

According to Marc Faddoul, a researcher at the University of California Berkeley School of Information who studies AI and disinformation, collaborative filtering may also reproduce whatever bias there is in people’s behaviour.

This can create a feedback loop where people are only ever recommended a particular type of creator, leading to a lack of diversity in their feed - Faddoul told Buzzfeed in 2020.

So when this content is promoted through social media, either by an algorithm or likes, young people are inadvertently being taught that a white saviour complex, and the white gaze, can be leveraged as a form of social currency.

Development is becoming a commodity that can be bought and sold, all driven by the 21st-century desire to be successful online.

Tech this week: US probe into TikTok’s impact on kids’ health