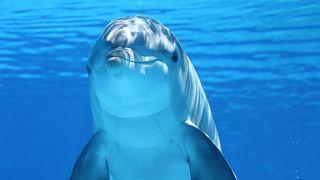 Dolphins have to ‘shout’ to hear each other over ocean noise pollution, a new study reveals.

Dolphins in noisy environments struggle to communicate and cooperate on tasks, researchers from the University of Bristol, UK, have found.

This could have wide ranging implications for marine life.

Sound travels far further underwater than light, and up to three times faster in water than in air, making it an essential form of communication for dolphins and other marine mammals. They rely on vocalisation to find prey and mates, to navigate, and to work together.

The European Commission found that underwater background noise levels have doubled every decade in the last 60 years, mainly because of shipping.

In 2014, Ifremer (the French Institute for the Exploitation of the Sea) revealed that worldwide ship traffic had increased by 300 per cent since 1992.

How did researchers study the effect of noise pollution on dolphins?

Having previously demonstrated that dolphins can use whistles to coordinate their behaviour, researchers studied the impact of noise pollution on the mammals’ ability to work together.

The study, published last week in the journal ‘Current Biology’, equipped two bottlenose dolphins with sound and movement recorders and placed them in a controlled lagoon.

The dolphins were then given a task that required vocal communication.

They had to work together to each press their own underwater buttons, placed at either end of the lagoon, within one second of each other. They were released from a starting point at the same time, then within five or 10 seconds of each other in different sessions to control for nonvocal forms of communication.

Using an underwater speaker, the researchers exposed the dolphins to increasing levels of noise, including broadband filtered noise and that of a pressure washer.

As noise levels rose, both dolphins compensated by increasing the volume and length of their calls. They were also more likely to change their body positioning to face each other and to move closer together.

Despite these adjustments, the dolphins’ success rate in the cooperative task dropped from 85 per cent during ambient noise control trials to 62.5 per cent during the highest noise exposure treatment.

What effect could noise pollution have on dolphins in the wild?

Although the experiment was conducted on dolphins living in human care, its findings indicate the potentially detrimental effect of noise pollution on wild dolphins too.

Noise pollution can also disrupt ‘echolocation’, the sensory ability of whales and dolphins to find food, socialise, and navigate underwater. In extreme cases, it can even cause physical harm, including temporary hearing loss, according to the World Wide Fund (WWF).

When food intake and reproduction are suppressed, marine populations, food chains and biodiversity may be impacted.

How can we reduce human-made underwater noise pollution?

Regulations could be introduced to reduce underwater noise pollution from shipping and other sources.

Measures to reduce vessel collisions with marine mammals have already been implemented in some places, including most recently along the US east coast. These include instructions to avoid areas with known concentrations of whales, and to reduce speed in vulnerable areas.

However, as sound can carry for thousands of miles underwater, the effects of noise pollution cannot be avoided solely via route and speed alterations.

The European Commission’s ongoing LIFE-PIAQUO project aims to develop and test tools to reduce underwater noise pollution and its impacts on Mediterranean aquatic biodiversity. Among other measures, it is exploring the optimisation of propellers to limit cavitation - the formation of vapour bubbles - the main origin of ship underwater radiated noise.

Like land vehicles, ships could also be required to install mufflers to reduce the noise emitted by their engines.

Investment in electric shipping, which is quieter conventional shipping, could help combat noise pollution too.

Some countries, such as Germany, already have noise limits in place for offshore construction and pile driving.