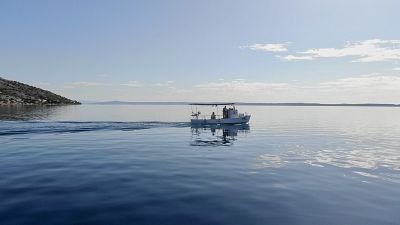 Small-scale fishers make up half of all those employed in Europe’s fishing sector. Yet when it comes to policymaking, they often find themselves overlooked in favour of industrial-sized organisations.

But they face the same environmental and economic challenges as everyone else, and in Croatia and Greece small-scale fishers are finding innovative ways to respond.

Sustainable fishing as a premium product

"My whole life, ever since I was young, I watched fishermen's boats at sea right in front of my house," says scampi fisher Šime Barić. "And I imagined how one day I could become like them. Fishing always fascinated me, and I love being at sea."

Šime catches langoustines in the Velebit Сhannel for Roza Fishing. Also known as scampi, they are Croatia's most iconic and prized seafood. But despite the high value of his catch, he's made the choice to fish less.

The size of Šime's boat and the type of his gear officially make him a "small-scale fisher".

But they play an important role, both cultural and economic, in small coastal communities like Šime's village, Barić Draga.

"Here, in this area, there really are no other sources of income than fishing," he says.

"It's perhaps the only way you can work all year round and earn money."

Roughly one morning out of two, when the weather's favourable, Šime checks his creels — they're the cages that catch langoustines on the seafloor.

"What's very important is that there's no bottom trawling in this channel," he says. "We don't drag nets along the seafloor. All the scampi from this area have been caught with selective gear - meaning it only captures larger ones that can't pass through the mesh. The seabed stays intact, and the langoustines are undamaged, with minimal stress, so it's really a premium product."

Šime is working together with Marina Mašanović - an oceanologist from the University of Zagreb.

Herself a fisherman's daughter, she's using her PhD research project to help fishers like Šime make their creels even more selective: they want to avoid catching smaller scampi that are legal to take, but so cheap they're not worth the effort.

"I've done an analysis and came up with the optimal mesh size," explains Marina. "So that fishers no longer have to spend time sorting the catch - they'll only catch larger specimens that are the best suited for the market."

Šime also puts back all the female langoustines he catches - even the larger ones that he could easily sell for 35€ a kilo. Each female can produce a thousand eggs – so for Šime, releasing them means bigger catches in the future.

Those freed are likely to survive their encounter.

"This is not something the current regulation requires," says Marina. "Some fishers are doing it on their own initiative. It'd make a big difference though if it was legally prohibited to take females with eggs."

Making a choice to catch less has its costs - new selective gear, for instance, can be pricey.

But NGOs like WWF use European support to assist fishers with this transition.

We form cooperatives, we build business plans for them. We build brands, brands that customers would recognise and appreciate. And in that way, we want to differentiate these fishers who work in a sustainable way from the other fishers.

They want to show that in the long term, this will help both the environment and the small-scale fishers themselves. Sustainably caught fish and seafood have higher value: they're better suited for more expensive restaurants. And so by choosing a more selective approach, fishers can work less while earning more.

"We connect them to the market," says Fabijan-Hrvatin Peronja, Project manager at WWF Adria. "We form cooperatives, we build business plans for them. We build brands, brands that customers would recognise and appreciate. And in that way, we want to differentiate these fishers who work in a sustainable way from the other fishers. We want fishers that live from the sea to be the guardians of the sea, to protect this source of life for all future generations to come."

With this support, local artisans have formed a sustainable fishing cooperative and are about to open a brand-new fish market. For WWF, such examples prove that with the right assistance more small-scale fishers all around the Mediterranean could prefer to fish less and earn more — helping fish populations recover while preserving their jobs and their professional patrimony.

"The idea is to demonstrate that a sustainable way of fishing is possible," says Marco Costantini, Fisheries Project Manager at the WWF Mediterranean Programme Office. "Through supporting directly the small-scale fishers in the field, or by helping them in developing cooperatives and in so doing they can apply for European maritime, fishery and aquaculture funds to modernise their vessels, to change their nets, to increase selectivity."

There are other solutions too. In some tourist areas, artisan fishers are reinventing themselves as tour guides. On the island of Kythnos, in Greece, we meet up with Christos Iliou and Lia Kountouraki. After catches in the area declined significantly, this couple of lifelong fishers set up a pescatourism business.

"The problem here is overfishing," explains Christos. "With so many boats, casting and hauling their nets day after day, fish are becoming scarce. In general, around the island, there's a large decline. Every year, it gets worse. And personally, fishing is the only job I know. But now, thanks to fishing tourism, we can once again return to the sea — the sea that I love."

During their day on the boat, tourists can learn how artisan fishers work and how they care for the well-being of the sea. They also catch just enough fish for a tasty lunch onboard.

It's not cheap: a group of 4 tourists pays €400 for a 5-hour trip. But many consider the unique experience well worth the price.

"It's a nice thing to do," says Lia. "But many people don't know about it. They visit the island not realising they should try this. That's something I think we need to solve, because it really is a lovely experience."

As another way for small fishers to catch less while earning more, transitions to pescatourism are also supported by the EU and WWF programs.

"They need to obtain a special permit to engage in fishing tourism," says Michalis Margaritis, Project leader, WWF Greece. "They need to make certain modifications to their boat, for which they'll need some money. And they need to learn some new things because tourism is an activity they aren't familiar with. So through our programme, we've been organising some seminars for fishers to teach them about fishing tourism and the ways they can engage in it."

Small-scale fishers are not small - they represent half of all the employment in Europe’s fishing sector. They need assistance to face the rising economic and environmental challenges.

"Most of the investment and most of the attention made by the governments is all focused on large-scale industrial fisheries," says Marco Costantini. "But the small-scale fishers are a little bit isolated. To be transformed into sustainable small-scale fishers, they need support. There are several things we can do, but there is a need for coherent interaction between fishers, scientists, NGOs and decision-makers, all together involved in the transformation of this fishing sector."