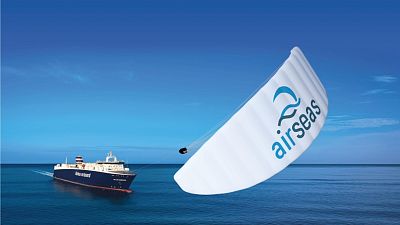 While you probably associate kites with your childhood,you might not associate them with the shipping industry.

One company is trying to change this by taking the humble kite to new heights. Founded by former Airbus engineers, French tech firm Airseas has invented the ‘Seawing’, a 1000m² parafoil that, according to its website, harnesses wind power to provide 90 tonnes of traction.

It is estimated that this could reduce fuel consumption and emissions from cargo ships by up to 40 per cent.

The shipping industry, which transports around 80 per cent of the world’s goods, is a growing source of greenhouse gas emissions, something that Airseas is determined to change.

According to Satista, container ships emitted 140 million metric tonnes of CO2 in 2020, while the industry as a whole accounted for 11 per cent of the world's transport carbon emissions.

The company is aiming to equip 15 per cent of the world’s cargo fleet with its Seawing technology by 2030.

The parafoil flies over 200m above sea level and will be tested out next year on the cargo ship Ville de Bordeaux. Currently chartered by Airbus to ship aircraft components across the Atlantic between France and the US, the 154 metre vessel will take part in a six month trial.

The parafoil flies over 200m above sea level and will be tested out next year on the cargo ship Ville de Bordeaux.

It will use a half sized, 500m² Seawing to make the journey from France to the US. The trial will run from January 2022 and has received formal approval from classification society, Bureau Veritas to begin operations at sea.

“A decade ago, we embarked on the ambitious project of channelling our unique aviation expertise towards creating a cleaner and more sustainable shipping industry,” says Vincent Bernatets, CEO and Co-Founder of Airseas.

“Today, I am beyond proud to see that vision becoming reality, with our first Seawing ready to make a tangible difference for our planet.”

How does the Seawing work?

According to Airseas, the Seawing is operated by a simple switch mechanism, which launches or recovers the kite. It then unfolds and refolds autonomously. All the while, the system collects meteorological and oceanic data, allowing it to adapt to changing weather patterns.

“Given the urgency of the climate crisis, the world needs to see a drastic reduction in carbon emissions now. In shipping, we can achieve this by using the full set of tools we have available to us today,” says Bernatets.

Seawing can be deployed on virtually any ship, say Airseas, helping to support the transition to more sustainable fuels.

“Wind propulsion is one of these and will play an essential role in helping shipping achieve its much-needed decarbonisation transition.”