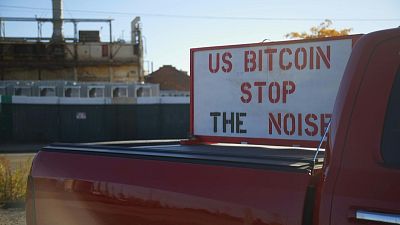 In the US border town of Niagara Falls, residents accustomed to the soothing roar of the famous waterfalls recently discovered a much less pleasant sound: the "haunting hum" of bitcoin mining plants.

Bitcoin mining plants have multiplied in the United States since China banned them from its territory in 2021. The United States is now emerging as a global leader in the industry.

Attracted by the cheap hydroelectric power available in Niagara Falls, digital mining company Blockfusion took up residence at a former coal factory there in 2019, followed by US Bitcoin in 2020, which operates from a former sodium plant.

Why is a Bitcoin mining plant so noisy?

If you’re not familiar with Bitcoin mining and how it works, check out this explainer.

In a bitcoin mining plant there are thousands of computers which means thousands of fans, all whirring constantly.

"I get four hours of sleep, maybe, because of that constant noise," says Elizabeth Lundy, a resident of Niagara Falls who lives about two blocks from the US Bitcoin plant.

"I can hear the noise even through the storm windows."

From Elizabeth’s front porch the noise can be heard loud and clear. And it only gets louder as you get closer to the plant on Buffalo Avenue.

Another local, who lives more than 1.5km from the plant, compares the sound to a 747 jet. Once, he could hear the sound of Niagara Falls - over 3km away - from his back garden, but now it’s just the whirring sound of the Bitcoin plant.

How can locals stop noise pollution?

One resident, Bryan Maacks, has had enough and launched a petition to try to stop the noise. He also drives around the town with a large "US Bitcoin Stop the Noise" sign attached to this truck.

"It's like having a toothache for 24 hours a day, every day," Maacks says of the noise.

Faced with a flood of complaints, mainly regarding US Bitcoin, the mayor of Niagara Falls decreed a moratorium on any new mining activity in December 2021. In early September 2022 he set a strict noise limit of 40 to 50 decibels near residential areas.

In early October, City Hall ordered the closure of the two bitcoin farms until they comply with new local statutes.

"The noise pollution of this industry is like nothing else that has been there," says Robert Restaino, Niagara Falls’ Mayor.

That's quite a statement in a city that’s embraced heavy industry for decades.

Does US Bitcoin care about the noise pollution?

While both companies say they are cooperating with the city, only Blockfusion had shut down its processors by the end of October and reduced the number of fans running, with US Bitcoin's still running at full capacity, an AFP reporter found.

However, US Bitcoin said it's taking steps to address the problem.

"Immediately upon these concerns being flagged, we erected a plastic barrier," the company told AFP.

"We also conducted acoustic studies and had plans drawn for a larger noise abatement wall" - though according to US Bitcoin, the moratorium prevented them from building it.

Niagara Falls isn’t the only place struggling with the problem in the US. Noise pollution complaints from Bitcoin mining have popped up in residential areas surrounding most plants.

Watch the video above to learn more about the noise pollution caused by Bitcoin mining.