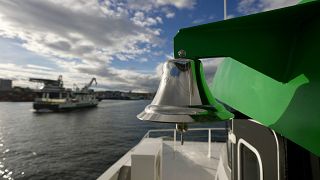 Ships are among the world’s biggest polluters. To replace them means finding alternatives to traditional diesel engines. With climate change at the fore of the industry's mind, companies are testing the waters with game-changing solutions.

You might think a cargo sailboat is something out of a history book, but in fact, they are actually the result of years of cutting-edge research and development. French company "Grain de Sail" claims to have created the first modern sailboat that meets the merchant fleet requirements.

"Before steam engines and fuel engines existed, all transportation was by sail. But we used modern methods when designing this ship to make it much more efficient," says Xavier Demeulenaere, regional director of Grain de Sail ahead of the crew’s transatlantic journey.

The company that makes chocolate and coffee from Latin American beans built its sailboats from scratch with sustainability in mind — like its specially designed 50-tonne cargo hold with climate control powered by solar and wind energy.

François Le Naourès, a sailor and crew member says: "We showed [our methods] to be economically viable, and we are ready to go even further into the future, with perhaps a much larger fleet of boats, we hope."

The company is now building a larger vessel and a new chocolate factory in Dunkirk, France.

Embracing the wind to reduce emissions is a growing trend in the shipping industry.

There are other sustainable projects for the shipping industry in the pipeline. Maritime transport company "Alizés" is building a hybrid ship equipped with mechanical wingsails to transport "Ariane 6" rocket parts from Europe to its launch site in French Guiana.

Another developer, "Airseas", suggests an automated kite system aiming to reduce fuel consumption and emissions of the ship by 10% to 40%.

Celebrated as the "Ship of the year", the Medstraum is the world’s first 100% electric high-speed ferry. The batteries are safely arranged above the deck, powering two electric motors. The ship doesn't need to rely on fossil fuels as a backup. It’s also much smaller and more compact than a diesel engine.

“In total [it gives] us 1500 kilowatt hours of energy. A typical electrical car would be between 70 and 90-kilowatt hours, so this is at least 15 times that in this vessel."

The ferry can easily handle a 90-minute, multi-stop commuter route between Stavanger and the nearby islands. It carries 150 passengers and has space for bicycles, all while offering a smooth, noiseless, and sustainable ride.

It's part of the public transport system in the area. The crew says piloting it is just like the old ferries, and right on schedule.

"When we use electric motors, it's much faster to start. It's like a car. It's no problem to be on time, because we have the power and the speed, so it's easy," says ferry captain Arnulf Bie.

A lot of people who work in Stavanger live on nearby islands. Beforehand, they had to choose between slow ground transportation and fast, polluting vessels.

This technology is going to be really helpful for meeting Norway's increasingly strict environmental regulations, which require all future ferries to be zero and/or low-emission.

Kolumbus are expecting to greatly improve its carbon footprint by cutting emissions by 1500 tonnes per year just with this one ferry. That's the equivalent of taking 60 buses off the road!

"If we look at our CO2 emissions, they are dominated by some very few fast ferries. And being able to electrify these, and take away those emissions, is a significant part of becoming CO2 neutral in the next couple of years," says Dahle.

The "Medstraum" ferry was developed as part of a research project called "TrAM" that was funded by the European Union. Scientists from Greece and Germany tested hundreds of models to find the most efficient shape for the hull, and the propulsion system - the propeller, rudder, and other components - was specifically optimised for this ferry. The engineers say it's performing even better than they expected, with a groundbreaking level of propulsion efficiency that saves almost 30% of energy compared to standard solutions. That's really important for a battery-powered vehicle.

Tone Vik, Technical manager at Servogear, explains: "If we can twist just a few percent more efficiency, it means that the vessel can either go faster or it can go longer. So this is really a good project showing that we have the knowledge and competence to bring electric vessels to the market."

To keep the weight as low as possible, the shipbuilders used aluminum structures — sometimes down to 2 millimetres thin.

The overall design of the ferry is also innovative — it uses a modular approach that allows future vessels of this type to reuse the same elements, making them more cost-effective to design and produce.

According to Edmund Tolo, R&D/Sales Manager at Fjellstrand shipyard in Norway, "We tried to learn something about the modularity concepts that are used in the car industry and the aeroplane industry, and transfer that into the shipping industry."

Medstraum runs about a dozen circular routes each day and plugs in for quick recharges between trips. And the best part is that all the electricity comes from renewable energy sources.

So, this new fast ferry is setting the course for replacing smoke-polluting boats with a truly clean alternative.