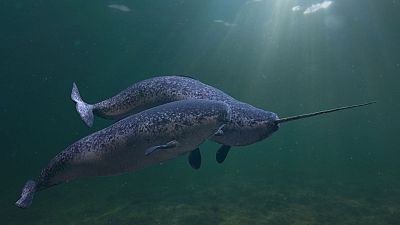 Narwhals are stressed by the sound of human activity in the Arctic, a new study has found.

The ‘unicorns of the sea’ are incredibly sensitive to the noise from airguns being used by ships searching for oil and gas in the seabed, as well as from mine blasts and cruises.

Scientists at the University of Copenhagen and the Greenland Institute of Natural Resources (Pinngortitaleriffik) have found that the tusked whales are affected as far away as 40 kilometres - almost the distance of the London marathon.

They stop emitting the click sounds that they need to feed, they stop diving deep and they swim close to shore.

“The narwhals' reactions indicate that they are frightened and stressed,” says Outi Tervo, researcher and marine biologist at the Pinngortitaleriffik.

“They stop emitting the click sounds that they need to feed, they stop diving deep and they swim close to shore, a behaviour that they usually only display when feeling threatened by killer whales. This behavior means that they have no chance of finding food for as long as the noise persists.”

Narwhals are notoriously difficult to study because they only live in the High Arctic, the inner circle around the North Pole, which is often covered by ice. But the research team managed to tag a pod of narwhals - collectively known as a ‘blessing’ - in the Scoresby Sound fjord system of East Greenland.

From a ship in the fjord, the scientists emitted a range of noises from both the engine and an airgun - like those shooting powerful sonic waves down to the seabed to form a geological picture of oil and gas reserves.

Using state-of-the-art technology including an underwater microphone, an accelerometer (a device that measures movement in three directions) and heart rate monitors, they found that the impact on narwhals is much more than previously realised.

Narwhals live in a world of sound

These magnificent whales plumb dark depths of up to 18,000 metres - and so have to rely on senses other than sight to hunt.

Like bats, they navigate by echolocation, making clicking sounds to work out the location of fish and other objects using reflected sound.

That means they’re highly attuned to disturbances in their underwater soundscape, and react to noise 20-30 kilometres away from a noise source.

“It is quite surprising that we can measure how something so far away can influence whale behaviour," says Professor Susanne Ditlevsen of the University of Copenhagen's Department of Mathematical Sciences.

Remarkably, “even when a ship's noise is lower than the background noise in the ocean and we can no longer hear it with our advanced equipment, the whales can hear and distinguish it from other sounds in their midst.”

After a week of sonic tests, the researchers watched the cetaceans’ behaviour return to normal again.

A call to action for countries in the Arctic Circle

With the Arctic warming three times faster than the rest of the planet, and people encroaching further into narwhal territory, the threat to the species’ health is growing louder.

Sustained exposure to noise - from a new shipping port, for example - could inhibit the whales’ success in hunting for a longer period of time, with serious results, warns Tervo. “In this case, we fear that it could have psychological consequences for them and impair their fitness.”

Narwhals live primarily around Greenland, northeastern Canada, Svalbard in Norway and northern Russia. East Greenlandic populations in particular are estimated to be in sharp decline according to NAMMCO (North Atlantic Marine Mammal Commission), with less than 1,000 individuals left.

Scientists hope their findings will be a wake-up call for authorities.

As such, it is up to these countries to protect them. And the scientists hope their findings will be a wake-up call for authorities.

"Changes are happening so quickly in the Arctic, that we are afraid that narwhals won't be able to adapt unless more of an effort is made to protect them,” says Tervo. “Some areas are so important to narwhals that it could be argued that human disturbances should not be permitted there at all.

“Elsewhere, it may be possible to make rules about, for example, how fast you can sail, or that you can only sail with far-quieter electric motors. Technology offers excellent opportunities to reduce noise.”