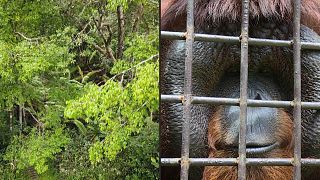 Jakarta, the capital of Indonesia, is sinking.

Known for its high pollution, this city on the island of Java is struggling to survive amid environmental, overpopulation and infrastructure challenges.

To address the problem, the Indonesian government plans to build a brand new capital city on the island of Borneo - but not everyone is convinced it’s a good idea.

Why is Indonesia moving its capital city?

Jakarta is one of the world's most overpopulated cities. Its greater metropolitan area is home to more than 30 million residents.

The sprawling megapolis sinks about six centimetres a year due to the excessive extraction of groundwater for its residents, according to a 2021 study by Indonesia's Agency for the Assessment and Application of Technology. This makes it one of the fastest sinking cities on Earth.

A quarter of the capital's area will be completely submerged by 2050 if urgent measures aren’t taken, the National Research and Innovation Agency said.

Researchers also believe water supplies may dry out for many in Jakarta and wider Java if Indonesia does not relieve pressure on resources.

"Jakarta and Java Island are heading towards a clean water crisis. We projected the crisis might happen in 2050," earth scientist Andreas said, blaming rapid population and industrial growth.

"When the population explodes, the poor sanitation will get worse, pollutants will contaminate the rivers and shallow groundwater, rendering them unusable," he added.

Pollution from Jakarta’s traffic-choked roads and the absence of a rubbish collection system - forcing many to burn their trash - has also produced air quality that at times rivals New Delhi and Beijing.

With more than 17,000 islands, Indonesia is the largest archipelagic nation on earth. But 56 per cent of its population and most of its economy are concentrated in Jakarta and the wider Java Island, which is home to more than half of the country's 270 million people.

By comparison, East Kalimantan province - where the new capital Nusantara will be built - has fewer than four million people.

Another reason for the capital relocation cited by the government is disaster mitigation.

According to the Meteorology, Climatology and Geophysics Agency, Jakarta is surrounded by active fault lines, making it perilously vulnerable to earthquakes. Borneo, on the other hand, has the lowest possibility of earthquakes.

Where will Indonesia’s new capital be?

Located in eastern Borneo, the world's third-largest island, Nusantara is set to replace Jakarta as Indonesia's political centre by late 2024.

The government has prepared 56,180 hectares in East Kalimantan province on the Indonesian part of Borneo, an island the country shares with Malaysia and Brunei.

But the two-hour drive from the island’s Balikpapan city to the sweeping green expanse of Nusantara's "Point Zero" reveals the scale of the new capital's potential impact on this biodiverse area.

The island that Indonesians call the "lungs of the world" is home to long-nosed monkeys, clouded leopards, pig-tailed macaques, flying fox-bats and the smallest rhinos on the planet.

By 2045, the Indonesian government says Nusantara will host 1.9 million residents. That is more than twice Balikpapan's population, importing a wave of human and industrial activity into the heart of Borneo.

Environmentalists warn building a capital city in this prehistoric location would accelerate deforestation. Indigenous communities who have been living in the area for generations could also be displaced.

What are the environmental consequences of Indonesia’s new capital?

With construction set to ramp up this year, environmentalists warn building a metropolis will speed up deforestation in one of the world's largest and oldest stretches of tropical rainforest.

Indonesia also has one of the world's highest rates of deforestation linked to mining, farming and logging, and is accused of allowing firms to operate in Borneo with little oversight.

Life is already changing for the worse for some of the area's animal inhabitants.

At an orangutan sanctuary on land marked for Nusantara's future expansion, illegal encroachments have intensified since the capital's location was announced.

Around 40 per cent of the Borneo Orangutan Survival Foundation (BOSF)-run sanctuary's 1,800-hectare reforested area has been damaged in recent years. An illicit mine has even been built there, according to chief executive Jamartin Sihite.

Indonesian President Joko Widodo has pitched a utopian vision of a "green" city four times the size of Jakarta where residents would commute on electric buses.

His city authority chief, Bambang Susantono, presented the initial plan to journalists in mid-December, pledging carbon neutrality by 2045 in what he dubbed the world's first-ever sustainable forest city.

What will happen to the people who live in Borneo?

Sibukdin, a local Indigenous Balik tribe leader, fears the development will drive away his people. Like other Indigenous groups in Borneo, thousands of Balik tribe members rely on the forest to meet their daily needs.

"The land and the farms are inherited from our ancestors. The land is the biggest asset of our tribe,” Sikbukdin explains.

“For us, the farm is the source of life. If our land is taken away, how could we farm? How could we live?"

More than 90 per cent of the forest his community uses for hunting and foraging has already been lost to commercial activity since the 1970s.

While officials have vowed to respect Indigenous rights and compensate those affected by Nusantara, provincial officials said they would verify all land claims and only accept ownership proof.

Sibukdin said not all Balik tribe areas had been formally recognised.