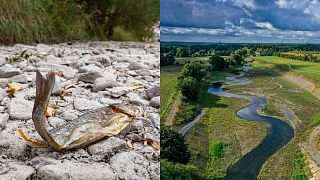 Clear water splashing over stones. Deep pools in the river bends. Fish coasting in the current. After last year’s ecological catastrophe, that’s not the image of today’s River Oder.

It starts in the Czech Republic and courses through Poland, creating a natural border with Germany before flowing into the Baltic Sea.

Last summer the river was a truly dystopian sight: covered in a carpet of dead fish, giving off an unbearable stench of decay.

At the peak of the catastrophe, half a tonne of fish cadavers floated through the Oder per hour. Experts estimate that it will need at least 15 years to recover after a toxic algae bloom decimated the fish and mussel populations.

How does a river bounce back from such dire straits?

Over in western Germany the Emscher - a tributary of the Rhine - is living proof that even the most polluted rivers can reach better days.

For those who lived in the Ruhr area in the 70s and 80s, their most potent collective memory of the river can be summed up as, "Close the car window. We're driving over the Emscher."

A narrow strip of brown sewage surrounded by high dykes with signs warning of the danger to life when swimming, the Emscher could often be smelt from miles away.

It seemed impossible that such a cesspool could ever become a clean river again. And yet it did. Lessons from the Emscher give hope that with appropriate measures, the Oder can flourish again too.

How did the River Emscher recover?

In the middle of the 20th century, the Emscher was considered the dirtiest river in the country. Both industrial and domestic wastewater flowed into an open, above-ground canal.

But the 1980s brought a change in thinking. Mining in the region declined and the idea for an underground canal came up, as there was less need to worry about earth movements, broken pipes and groundwater pollution. The Emscher was to be renaturalised.

Step by step, over several decades, an underground system of sewers and four large sewage treatment plants were built. The concrete floor was broken up and a natural riverbed was created.

You can tell nature is coming back.

On a recent count in the Dortmund region, his team found more than a thousand different species.

“That is a sensational result in a place where, so to speak, only a sewage canal used to run above ground,” he says.

“Even species that are on the red list are native again, such as dragonflies, the lapwing; the kingfisher has already been back for a while. We have now also found the first beaver. You can tell nature is coming back."

Looking at Europe’s rivers nowadays, the usual management style is closer to the Oder than the Emscher. According to the European Environment Agency (EEA), only 38 per cent of monitored lakes, rivers and other surface water bodies are in ‘good’ chemical status.

Very few of Europe’s rivers remain in their natural form. The majority have been altered by human impact - by straightening the river or building barrages, for example.

Most rivers, like the Oder, have been turned into waterways. This allows them to be navigated, but often comes at an ecological cost.

Rivers are not straight lines ... That's what makes a body of water an ecosystem

“It's all about restoring the changeability of the system,” says Schäfer. “Rivers are not straight lines, but rather meander and sometimes vary in width and depth. That's what makes a body of water an ecosystem.”

Several independent reports, including by the Polish Academy of Science (PAN), the Polish Hydrobiologists Association (Polski Związek Hydrologów) and WWF Poland, confirm that the over-regulation of the Oder stripped the river of its natural resilience.

Can the Oder be saved?

Is it possible to apply the renaturation concept of the Emscher to the Oder?

Professor Paweł Rowiński, hydrogeologist at PAN’s Institute of Geophysics, explains that the Emscher differs from the Oder in scale and development.

“It will be hard to translate the solutions one-on-one,” he says. The Oder is 10 times longer than the Emscher, and is unlikely to ever return to its former state. “The Oder is already transformed so we should look at innovative solutions that are a mix between transformation and nature.”

Nature-based solutions are just such a mix - they include technical measures but are determined by nature.

“The Emscher renaturalisation is a great example of nature-based solutions,” adds Rowiński. “But the Emscher solutions could only be considered on certain parts of the Oder.”

In Poland, nature-based solutions have so far only been introduced experimentally on small rivers. But their potential is promising, especially in the context of climate change.

More extreme weather brings higher flood risks, which appropriate river management can mitigate. As Rowiński explains, “Nature-based solutions can connect rivers back to their floodplains and as such, work as flood protection.

“We give rivers space, move levees further, and create green spaces that can fulfil several functions.” Just like today’s Emscher.

One expert who was involved in the naturalisation project, Professor Uli Paetzel, says authorities should look closely at what’s possible given the procedures already in place.

“There needs to be good monitoring of water quality and strict monitoring of discharges in clear permit procedures, [controlling] what you can discharge where and in what quantities."

These suggestions cut to the heart of the Oder tragedy.

“Building the Oder ecosystem back without [...] a healthy system of controls, monitoring, management, and involving the scientists and the wider society, will not succeed,” says Piotr Nieznański, director of WWF Poland.

The first step is to create a constant, automated monitoring system that can pick up on any future catastrophes.

If alerted, authorities will need to respond faster than last summer. The laws around discharging industrial waters and sewage need toughening up too, agree Nieznański and Rowiński.

Only then is there a chance that the Oder could - like the Emscher - make it back from wastewater to nature.