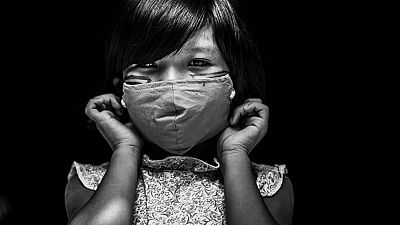 2020 has seen deforestation at a 12-year high in the Brazilian Amazon. But not enough support is given to the Indigenous people fighting on the ground to stop it.

The Guajajara people, living in the northeastern Brazilian states of Pará and Maranhão, form part of one of Brazil's largest Indigenous communities.

So far, they have already lost some of their people, leaders among them, in the battle to preserve the rainforest. Violence is part and parcel of defending the land against illegal activities.

Genilson Guajajara is a young photographer choosing to fight in a different way.

He captures imagery of the Indigenous community, to show what life is like under the constant threat of deforestation and, now, the looming enemy of COVID-19.

"Here in my community, there have been a lot of contaminated people," Genilson told Euronews Living.

"I also had COVID a couple of months ago and I lost my grandmother which was a very difficult moment," he added. To combat the spread, communities eventually decided to stop outsiders entering their land for safety reasons.

The main threat to their lives, however, is the ongoing destruction of the rainforest - their home.

11,000 square kilometres fall victim to deforestation annually, about the size of a country like Qatar or Jamaica.

"It's been one of the highest rates that we have since 2008," said the Director of Science for the Amazon Environmental Research Institute, Ane Alencar. "It is very alarming for Brazil because it gives that sensation that we are not being able to control the losses of the forest."

Currently one of the main causes of deforestation, violence and fires in the Amazon is "land grabbing", Alencar explained.

"Land grabbers, they go to these public lands, which once in a while are already occupied by traditional populations or some indigenous groups. And these people just pretend the land is theirs and they put these people out with violence."

This is happening on public land, as well as on the Indigenous territories that are not strongly protected by law. Alencar says legal ownership over the illegally invaded land is usually claimed afterwards and the current government is working on passing laws that can legalise them.

Watch the video above to learn more about the importance of protecting the Amazon rainforest.