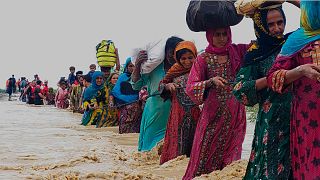 Rescue workers help residents evacuate from a flooded area caused by heavy rains, in Lasbella, Pakistan, July 2022.   -   Copyright  AP Photo/Hamdan Khan
The opinions expressed in this article are those of the author and do not represent in any way the editorial position of Euronews.
By Mami Mizutori  •  Updated: 09/01/2023

The insured losses from disasters surpassed €100 billion in 2022.

Measurable and powerful, they give an idea of the otherwise unimaginable and abstract scale of the catastrophe we faced last year - but this is just the tip of the iceberg.

Drought in the Horn of Africa killed more than 9.5 million livestock in Ethiopia, Somalia and Kenya. Pastoralist families depend on livestock to stay alive. How many would have been insured?

Floods inundated a third of Pakistan putting hospitals, roads and schools under water. Their losses are estimated at a colossal €28 billion.

But the figures I look at closest are the estimated costs of resilient reconstruction, rehabilitation and recovery. How much, for example, does Pakistan need to make sure it does not face this tragedy all over again?

Because the world has failed to move the needle on emissions, at least in the short-term, climate change driven extreme events are inevitable. Widespread death and destruction are not.

My office, the United Nations Office for Disaster Risk Reduction (UNDRR), is calling for Zero Climate Disasters by 2030. It sounds bold but we have the tools at our disposal.

Can we really achieve ‘zero climate disasters’ by 2030?

Between 1970 and 2022, Bangladesh dropped its cyclone mortality rate by more than 98 per cent, saving millions of people from violent death.

After a devastating storm killed upwards of 300,000 people, it shifted the nation’s mentality from recovery to prevention, developing a cyclone early warning system, mobilising communities, and building gender-sensitive evacuation shelters.

When an even angrier storm, Cyclone Sidr, hit the country in 2007, some 9 million people were affected, but less than 3,500 died. Every death is a tragedy, but every life saved is a reason for hope.

This is disaster risk reduction.

How can we reduce exposure to climate disasters?

Our thinking needs to rapidly switch to prevention. This requires first accepting the idea that disasters can be prevented and second putting in the funds to make that happen.

The top priority for funding should be to expand early warning systems so that they cover all hazards and all people.

Early warning can reduce deaths by more than 85 per cent and reduce the ensuing damage by 30 per cent. But right now half of all countries are being blindsided by extreme events, without access to systems to alert the danger.

That is why UN Secretary-General António Guterres unveiled a plan at COP27 for early warning systems to reach everybody on this planet by 2027. Implementing his Early Warnings for All Initiative will cost €2.9 billion over five years - less than €0.50 for each person to be covered.

How can we help those most at risk from climate disasters?

We must also prioritise global efforts to reduce vulnerability, poverty and inequality, and strive to meet the 2030 Sustainable Development Goals.

Poor people are more vulnerable to shocks and poor people suffer more when shocks happen. Reducing vulnerability requires us to expand social safety nets and link them to early warning systems. It means to anticipate needs and address them before they materialise.

Take the example of hunger alone: some 828 million people are hungry and living on the edge of disaster. They are extraordinarily vulnerable to any other stressors.

In addition, we need to prioritise local action. Most disasters are small-scale events and therefore local by definition. Meanwhile, local and Indigenous communities often know what solutions work best but lack the appropriate resources. They need financial and technical support together with political representation. This includes civil society organisations that represent the most at-risk groups.

Finally, countries must up ambition and accelerate the pace of resilience-building on the ground. In May, I am inviting global leaders to New York to set out commitments for a future free from disasters. A future where we are equipped to withstand the risk we face.

That is how we reduce future death and destruction. That is why national and local governments must target zero climate disasters by 2030.