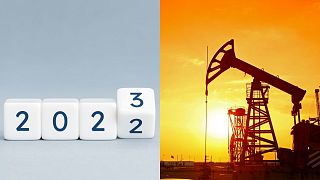 A climate linguistics specialist has predicted which words about climate change we will be using in 2023.   -   Copyright  canva
By Charlotte Elton  •  Updated: 16/01/2023

How will we talk about the climate crisis in 2023?

The news is filled with the jargon of environmentalism - from net zero to biodiversity. As global heating intensifies, this shared vocabulary is growing. Indeed, in 2019, the Oxford dictionary word, or more accurately phrase, of the year was ‘climate emergency’.

“Words matter because they can shape our perceptions, beliefs, and behaviour. In the policy realm, they guide decisions and actions.” she told language learning platform Babbel.

“In the effort to tackle climate change, it’s important that we use language as effectively as possible to engage the public and move policies at every level quickly because failure is not an option.”

Hassol has highlighted three terms she hopes will be commonly used throughout next year.

But in the 21st century, some extreme events aren’t ‘natural’ at all - instead, they are accelerated (or even directly caused) by human alteration of the climate.

The devastating Pakistan floods - which killed over 1,700 people and displaced 7.9 million - from earlier this year are an example of this.

Global warming means more moisture in the atmosphere, which means more precipitation. In turn, this falls as rain on grounds baked hard by extreme heat - meaning it doesn’t absorb. The 2022 monsoon rainfall in Pakistan was nearly 190 per cent higher than the 30-year average.

“I wince when I hear people say these are natural disasters. This is very much the age of the Anthropocene: these are man-made disasters,” she said.

The term carbon footprint - the total emissions an individual is responsible for - is well-known.

But it was first popularised by oil companies like BP as a way to shift the onus to battling emissions on to the individual, and depoliticising the fight to stem global heating. BP - one of the world's biggest polluters - first unveiled a 'carbon footprint calculator' all the way back in 2004.

Individuals do contribute to climate change - but emissions aren't the only way in which they do so. Other variables includ how they vote, whether or not they participate in climate activism and where they spend and invest their money.

‘Carbon shadow’ is a more expansive term which encompasses factors beyond personal consumption. In this way, it’s more systemic than ‘carbon footprint’.

Hassol hopes that ‘carbon emissions’ will be replaced by the term ‘heat trapping pollution.’

By connecting climate change with something visceral and dangerous, the new term brings more immediacy to a problem that’s often seen as unfolding far away or in the future, even though it’s causing suffering now.

Todd Ehresmann, a linguistic expert at Babbel, echoes this call for urgency and simplicity.

“Due to conversations on the climate crisis being so closely linked with scientific research, discussions on the topic can use complex terminology which can be less accessible for the general public,” he said.

“Communicating the crisis in a digestible manner, for example using metaphors to directly paint a visual picture of the scientific phenomenon you mean to highlight, is a useful tool to ensure the message is clear for all.”

The same linguistic shift drove the change from ‘climate change’ to ‘climate crisis,’ he added.

“Updating language to align with the evolving urgency of the situation is imperative,” he said.