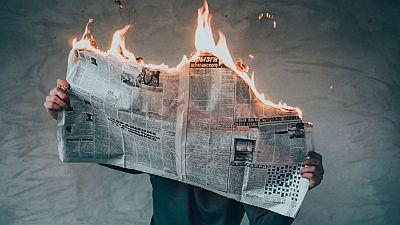 UK newspaper The Guardian has made a significant change to it stylistic guide when it comes to reporting on the environment. In a bid to spread awareness of the severity of our climate problem, the British publication will be updating the language they use across the board.

Which phrases are going to change?

Climate change has become an unequivocal stock word when it comes to anything ecological. So much so, that it doesn’t resonate anymore, its lost its impact. Put simply, the term climate change is just not severe enough. ‘Change’ is too meagre a word to describe the pressing predicament we are in - a climate ‘crisis’ is far more apt. Other terms they will opt for include ‘climate emergency’ or ‘climate breakdown.’

Once again, ‘global warming’ is a term that is overused to the extent that we don’t think about what it means anymore. ‘Heating’, just a synonym for ‘warming’, will perhaps be more powerful to readers as it makes you reflect on the heating process of the planet, rather than simply relying on standard phrases.

What did the Editor-in-Chief of the Guardian have to say about it?

Katharine Viner, editor-in-chief of the newspaper, made a statement about the linguistic adjustments:

“We want to ensure that we are being scientifically precise, while also communicating clearly with readers on this very important issue. The phrase ‘climate change’, for example, sounds rather passive and gentle when what scientists are talking about is a catastrophe for humanity.”

“Increasingly, climate scientists and organisations from the UN to the Met Office are changing their terminology, and using stronger language to describe the situation we’re in.”

Why is this so important?

In October, the UN Intergovernmental Panel on Climate Change (IPCC) announced that carbon emissions should be halved by 2030 to avoid even greater risks of drought, floods, extreme heat and poverty for hundreds of millions of people. In May, a report by the UN saw global scientists warning that human society is in jeopardy as a result of the destruction of wildlife and ecosystems around the world. Photographers such as Josh Haner are documenting this destruction in photos.

These amendments to the Guardian’s style guide are in good company, given the recent the addition of the ‘global carbon dioxide level’ to the newspaper’s daily weather page. The original terms are not to be banned, but the alternatives will be favoured to wake readers up to the emergency we are faced with and, hopefully, incite us all to take action and start living more sustainably.