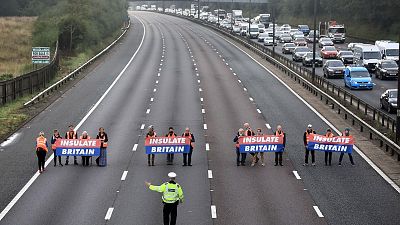 This is music to the ears of protest group Insulate Britain, who last year blocked roads and motorways in a bid to get the government to fix the UK’s leaky housing stock, thereby reducing energy consumption. Household energy accounts for 20 per cent of the UK’s emissions.

“[This is a] win for everyday people in civil resistance,” the group tweeted.

Four Insulate Britain activists are on trial this week in London for blocking the M25 - Britain’s biggest major motorway - as part of this 2021 campaign.

What has the UK government announced?

Starting in 2025, the government will funnel £6 billion into energy efficiency measures like increased insulation.

The government’s new cash commitment will reduce the energy consumption of British buildings and industry by 15 per cent, Chancellor Jeremy Hunt estimated.

Environmental organisation Friends of the Earth slammed the proposed start date of the rollout.

“Kicking the can down the road on home insulation for another two years means millions of people will continue to suffer cold homes and sky-high energy bills.

“The government should have listened to its own climate advisors, the Climate Change Committee, who only last week called for an urgent and rapid roll out of loft and cavity wall insulation.

“Today's #AutumnStatement budget for insulation could be better, but would not be there at all, without those who served prison time for getting a common sense policy to help with costs & climate on the agenda.”

The Climate Change Committee - the UK's independent advisory body on climate change - offered a qualified endorsement of the plan, adding that 'gaps remain.'

Additional funding commitments are a much-needed boost, but increased funding from 2025 misses the opportunity to support people and businesses to save money, energy and reduce emissions now.

"The new taskforce and promised information campaign are also welcome and should ensure the delivery of energy efficiency measures occur where they are needed most. Yet, gaps remain to support those in owner-occupied homes and in the private rented sector to make changes."

Why are Insulate Britain campaigners on trial?

Insulate Britain rose to prominence in 2021 when they blocked a number of major roads in and around London.

In September 2021, a group of protestors blocked the M25, the massive highway encircling the capital city.

The trial of the first four of these protestors begins today. It is likely to last four days.

Daniel Shaw, 37, a public sector worker, Karen Wildin, 58, an English teacher, Maria Lee, 69, a retired teacher, and Victoria Lindsell, 67, also a teacher, are being tried on a charge of public nuisance.

“If found guilty the supporters could face a maximum sentence of life imprisonment,” an Insulate Britain statement reads.

56 of the organisation’s supporters are due to stand trial over the next 13 months on a charge of public nuisance.

“We estimate (these trials) will take up around one thousand four hundred and twenty eight hours of court time,” the statement reads.