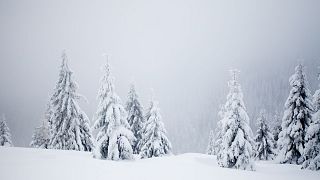 Climate change is wreaking havoc with weather patterns year round. What will it do to chances of a White Christmas?   -   Copyright  Canva
By Charlotte Elton  •  Updated: 18/12/2022

Dreaming of a white Christmas?

From snowmen to sleigh rides, much of the cultural imagery of Christmas revolves around wintry weather.

Even in the Southern hemisphere - where Christmas falls in the middle of summer - Christmas cards and decorations often feature glistening carpets of snow.

But as climate change wreaks havoc with traditional weather patterns, will such dreamy scenes become a rarity everywhere in the world?

In short, yes. But don’t throw out your mittens just yet - it’s complicated. And as the snow blanketing much of Europe and the UK proves, wintry weather isn't a thing of the past just yet.

What will Climate Change do to the likelihood of a white Christmas?

Globally, temperatures are going up.

The earth has warmed by about 1.1 degree Celsius since the start of the industrial revolution.

Without radical emissions cuts, we are on a pathway to exceed 3°C of global warming by 2030.

The UN has warned that existing climate pledges provide ‘no credible pathway’ to preventing temperature rises above 1.5 degrees on pre-industrial levels.

Intuitively, this seems like it would make a white Christmas less likely.

“White Christmases were more frequent in the 18th and 19th centuries,” says the UK Met Office.

“Climate change has brought higher average temperatures over land and sea and this generally reduces the chances of a white Christmas.”

The last eight years have been the hottest on record.

Where can you guarantee a White Christmas?

Your chances of a snowy Christmas obviously depend on where you are in Europe. In some places - like the Alps, or Scandinavia - snow is common.

White Christmases will likely continue to occur. However, it’s not guaranteed.

Scientists predict a “significant decrease in snow depth” in the Pyrenees over the next 50 years.

According to a 2021 study published in the Hydrology and Earth System Sciences journal, the number of snow days in the Alps will halve by 2100 if greenhouse emissions remain high.

But the power to prevent this scenario is still in our hands. According to the study, cutting emissions in line with the Paris Agreement would save more than 80 per cent of snow days in the Alps.

What about areas where it is typically milder?

In areas where the temperature is typically milder - like the United Kingdom, or parts of France, Italy, and Germany - the likelihood of snow is slowly diminishing. When the temperature is above freezing, winter precipitation falls as rain.

According to a 2020 study, snow could disappear from all of the UK by the end of the century.

“We’re saying by the end of the century much of the lying snow will have disappeared entirely except over the highest ground,” Senior Met Office scientist Dr Lizzie Kendon told BBC Panorama.

In Germany, the chances for a snowy Christmas have also declined in recent decades.

“Weather records show that in the 1970s, white Christmas, or at least the according cold temperatures, occurred about every three or four years,” Peter Hoffmann, from the Potsdam Institute for Climate Impacts Research, told Inside Climate News.

“With the average late December temperature increasing by about 1 degree Celsius, the odds for Christmas snow have decreased to about every five to eight years.”

This is a complicated question to answer.

But 31 per cent increased their probability of a white Christmas.

This is because in some areas climate change increases the chances of heavy snow.

A warmer world is more humid, with more moisture in the atmosphere. This moisture eventually falls as rain or snow.

This is why climate change increases flooding.

But when the temperatures are sufficiently cold, the increased moisture will mean intense blizzards.

In conclusion, climate change is going to mess with weather patterns in ways we can't yet fully comprehend. White Christmases may become a thing of the past in milder climes, but winter storms could also become more dangerous.

Youth activists from around the world meet at biodiversity summit