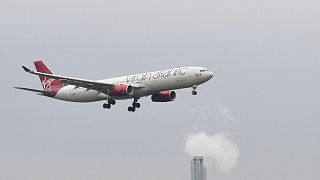 The UK-US flight will be powered by 100 per cent sustainable aviation fuel (SAF), a low-emissions fuel made from waste materials like used cooking oil.

Virgin secured a £1 million UK government contract - announced in May - to fly a Boeing 787 jet from London Heathrow to New York JFK.

The flight will be a key step to "sustainable" aviation, the Department of transport claims.

But what does it mean exactly, and just how green is it really?

SAFs are produced from feedstocks like used cooking oil, agricultural waste, and household trash such as packaging, food scraps, and textiles.

SAFs still give off carbon emissions when burnt. However the International Air Transport Association (IATA) estimates that they curb emissions by roughly 70-80 per cent over the course of the “fuel life-cycle.”

SAFs are currently mixed - at a 50 per cent ratio - with traditional fossil fuels.

Combined with “greenhouse gas removals, 100 per cent SAF will enable the delivery of a net zero flight”, a government spokesperson said.

“This trailblazing net zero emissions flight, a world first, will demonstrate the vital role that sustainable aviation fuel can play in decarbonising aviation in line with our ambitious net zero targets,” he said.

How green are Sustainable Aviation Fuels?

SAFs emit at least as much CO2 as kerosene – greenhouse gas savings come in the production stage.
Yet the production phase can be environmentally damaging, too.

If companies grow 'virgin crops' - not from waste - to offset emissions, these plantations can lead to deforestation and reduced biodiversity.

Using ‘virgin’ crops (i.e. not from waste) is hugely damaging: plantations of crops such as palm oil, rapeseed or soy are a leading driver of deforestation.

Activists have accused SAF advocates of using the technology to greenwash a polluting industry.

Climate consultancy Element Energy has slammed the government for its “unrealistic” jet-zero plan.

In a report released earlier this year, they accused the government of relying on unproven technology, and urged them to halt planned airport expansions at Gatwick and Luton.

Climate-conscious travellers are increasingly turning to other modes of transport, including train travel.

How widespread is the use of SAFs?

Aviation accounts for about two per cent of the world's global carbon emissions. A Lund University study found that avoiding just one transatlantic flight saves eight times more greenhouse gas emissions in a year than recycling.

But IATA - whose members carry more than 80 per cent of the world’s flyers - plans to reach net zero by 2050.

SAFs are often touted as the best route to decarbonisation. Oneworld alliance providers - including British Airways, American Airlines and Finnair - have pledged to use 10 per cent SAF by 2030.

The European Commission’s ‘ReFuelEU’ initiative proposed mandating fuel suppliers to use 2 per cent SAF from 2025 - gradually increasing to 63 per cent in 2050.

But current uptake is extremely low. In 2019, SAF accounted for just 0.1 per cent of all jet fuel used worldwide. Scaling up is a problem, as SAFs are more than twice as expensive as normal fuels.

The UK government has asked the aviation industry to bring at least three commercial SAF production plants online in Britain by 2025. It has also pledged £180m (€212m) to the SAF industry.

However, the Climate Change Committee (CCC) estimates that the UK aviation industry will use just seven per cent SAF by 2030.