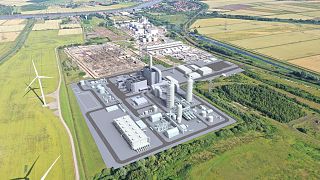 A huge carbon capture power station has won planning permission for the first time in the UK.

The Keadby 3 plant in north Lincolnshire is the first carbon capture and storage (CCS) project to be greenlit by the government.

The news came the same day as Levelling Up Secretary Michael Gove approved a new coal mine in England - the first in 30 years, which will release an estimated 400,000 tonnes of greenhouse gas emissions (equivalent to 200,000 extra cars on the roads).

Carbon capture technology was part of the justification for allowing a new coal mine - which Gove claimed would be “net zero compliant”. But commentators were quick to point out the as-yet unproven technology is not in commercial use in the UK.

The new CCS project seeks to change that as soon as 2027. It is backed by Britain's SSE Thermal, part of SSE, and Norwegian energy company Equinor - better known as an oil and gas major.

Grete Tveit, senior vice president for low carbon solutions at Equinor, describes it as “a significant milestone for our joint ambition to deliver clean, flexible and efficient power to support intermittent renewable generation and maintain security of supply.”

How much carbon will Keadby 3 pull from the air?

Business and Energy Secretary Grant Shapps signed off the proposed plant following extensive consultation, SSE said in a statement on its website on Thursday.

Keadby 3 would have a generating capacity of up to 910 megawatt (MW) and capture up to 1.5 million tonnes of CO2 a year, according to SSE. It says this represents at least 5 per cent of the UK government’s 2030 target.

It will be situated next to Keadby 1 and 2; two gas fired power stations in northern England’s Humber region.

The plan is for carbon pulled from the air to be sent through CO2 pipelines being built to transport emissions from industrial plants across the Humber to storage under the North Sea.

This is subject to final approval and investment; though the plant got a development consent order, the project is still in the due diligence stage of the government’s ‘cluster sequencing process’ for CCS.

Advocates of the technology say it has a key role to play in decarbonising the grid. But using CCS alongside gas fired power stations remains controversial among green groups.

“The time has now come for governments to stop chasing the CCS unicorn and instead build vibrant renewable energy sectors and massively increase energy efficiency of homes and businesses. The best and most proven way to stop climate change is to keep fossil fuels in the ground.”