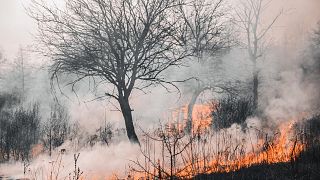 Europeans witnessed some of the continent’s most extreme weather in 2021. From record-breaking snowfall in Madrid to historic wildfires in Greece, many countries were battered by floods, storms and fires.

And with more and more people experiencing extreme weather, voting patterns are changing too, according to a new study published in Nature Climate Change.

Researchers combined data from the Eurobarometer - which runs public opinion surveys across the EU - with Parliamentary electoral data and climatological figures.

What they found was that high temperature anomalies and dry weather have a significant effect on voting patterns at a subnational level, increasing votes for green parties.

Where are voter choices most affected by climate change?

While extreme weather events, such as the flooding of the German village of Schuld in July, have made headlines, their effect on voting patterns varies significantly across Europe.

The study, led by scientists from the ​​International Institute for Applied Systems Analysis (IIASA) at the Wittgenstein Centre in Austria, discovered that geography plays a big role in whether people vote green after unusual weather patterns.

They found that the climate effect has a stronger influence on voters in cool and temperate regions of Europe with an Atlantic climate, such as France and Germany. While in contrast, the effect was weaker in regions with a warm Mediterranean climate like Greece and Italy.

"This is possibly due to the fact that the Mediterranean climate is already hot and dry in absolute terms, hence further deviations in temperature or rainfall may have little to no effect on environmental concerns and voting," explains Roman Hoffman, a researcher from the Wittgenstein Centre for Demography and Global Human Capital, where the research took place.

Voting choices appeared to be moderated by economic conditions too. According to the study, experiencing climate change first hand only lead to an increase in public support for climate action when the region has a strong economy.

As an example of this phenomenon, the researchers examined the wildfires that swept across large swathes of Greece in the summer of 2021. They found that while the natural disaster led to a rise in climate concern, this failed to translate into an upswing in votes for green parties.

"We think this is because wildfires are very destructive and can lead to major economic disruptions," Prof Raya Muttarak, one of the scientists working on the study, told Sky News.

"As a consequence, affected populations may tend to vote for more economically oriented parties to compensate for the losses rather than the green parties."

Similarly, wealthier metropolitan regions were more likely to vote for green parties than those in rural areas.

"Previous research has suggested that people’s economic interests can lead to a crowding out of concerns for the environment, if there is a perceived trade-off between the two issues," says Hoffman.

"In the aftermath of the global financial crisis of 2007–2008, for example, a substantial reduction in environmental concerns was observable across all European regions."

What does this mean for politicians?

Between 1980 and 2020, extreme weather and climate change events cost Europe up to €520 billion in economic losses, according to a report by the EEA. With the economic consequences of the crisis growing, the findings are particularly relevant to politicians looking to implement measures in line with the Paris Agreement and the EU Green Deal.

The research also suggests that if green parties want to increase their vote share across Europe, they will have to prove the economic benefits of voting for them, as well as the environmental ones.

"There are substantial differences in Europe as to how people perceive climate change risks and climate mitigation depending on the economic conditions, but also the demography and political climate in the regions," says Hoffman.

"Overcoming these major gaps is important to ensure that everyone is on board and that it is possible to generate the critical mass to implement climate mitigation and to realise the urgently needed sustainability transformation."