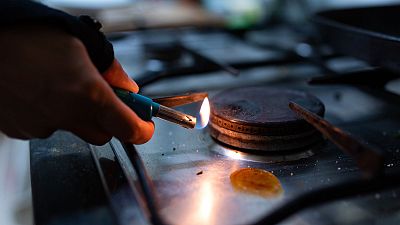 The possibility of winter blackouts in Europe is being held at bay by falling gas prices.

A spell of unusually warm weather, plus improved supplies, saw the wholesale price of gas drop below €100 per megawatt-hour (MWh) for the first time since mid-June on Monday.

It’s not a household name exactly, but the Title Transfer Facility (TTF) in the Netherlands is Europe’s leading trading hub of fossil gas, where traders swap ‘futures contracts’ for the asset, thereby setting its price.

Gas rose to a record €349 MWh in late August as governments grappled with underground storage deficits and shortages due to Russia’s war, before starting to gradually decrease.

Though they can take a while to make a dent in bills, wholesale prices directly impact the retail price that households and companies pay every month.

It’s not unqualified good news - one climatologist calls the October heat a sign of climate change “spiralling out of control” - and it’s unclear how long lower gas prices will last. But the turn will be welcomed by millions concerned about their energy bills this season.

How could a warmer autumn impact our energy bills?

There’s a range of factors at play in the reduced gas price. With temperatures milder than expected due to what the UK’s Met Office calls an ‘African plume’, many households have postponed switching on their heating.

This has helped to maintain supplies at gas storage facilities. Soaring energy bills are also acting as a deterrent, even on colder days.

And last week, EU leaders agreed on a mechanism to reign in the most extreme cases of volatility and speculation at the TTF. It’s not the broad price cap that some countries sought, but will act as an emergency ceiling to stop the bloc being exposed to uncontrolled prices.

Gas prices began to drop within hours of the consensus being reached, inews reports, well into Monday.

Though utility firms have been accused of being too slow to pass on savings in the past, there are signs of the market getting more reactive to protect consumers.

Ofgem, the UK’s energy regulator, recently switched to making quarterly adjustments to its price cap (the maximum amount consumers can be charged per unit of energy). So that should mean that households more quickly feel the benefit of lower wholesale prices.

The country’s National Grid, responsible for distributing electricity and gas, warned earlier this month that people could face a series of three-hour power cuts if a cold snap and reduced supplies conspire to make this necessary.

EU member states are also preparing for this ‘worst-case scenario’, which is looking less likely for now.