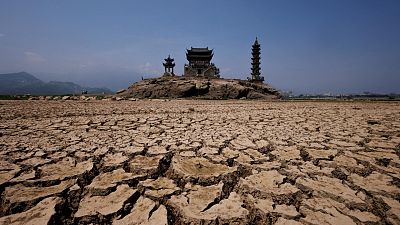 A view of pagodas on Louxingdun island that usually remain partially submerged under the water of Poyang Lake.   -   Copyright  REUTERS/Thomas Peter
By Rosie Frost  •  Updated: 25/08/2022

China is in the midst of an unprecedented heatwave and months-long drought during what is usually the rainy season.

The heatwave has lasted an astonishing 70 days and southern China in particular has seen its longest continuous period of high temperatures since records began 60 years ago.

It has caused rivers and reservoirs to completely dry up, drastically affecting hydroelectric power stations and causing rolling blackouts in some regions. Factories in Sichuan province - a key manufacturing hub for items like batteries and solar panels - were forced to close for six days in order to ration supplies of electricity.

Vital food crops are also at risk with four government agencies issuing a joint emergency statement on Tuesday (24 August) warning that the autumn harvest was under “severe threat”.

They urged local authorities to use water carefully, calling for the diversion of new water sources and even cloud seeding - dispersing chemicals into the air to induce rain.

The Yangtze River is drying up

Rainfall in the region is at its lowest since records began in 1961, according to China’s Ministry of Water Resources, causing some sections of the river to almost completely dry up.

Falling water levels have even revealed three Buddhist statues on a submerged island that are believed to be 600 years old.

In a section near the village of Zhupaoshan, Jiangxi province, the previously lush, green area has dried to shades of brown. The water in the lake has been reduced to just a thin stream.

Local media reports that levels in Poyang Lake were measured at just 9.87 metres on 19 August. Though the water usually varies with the seasons, it is the earliest date the lake has entered its low season since 1951.

It has been attributed to the continuous high temperatures and low rainfall in the Yangtze Basin.