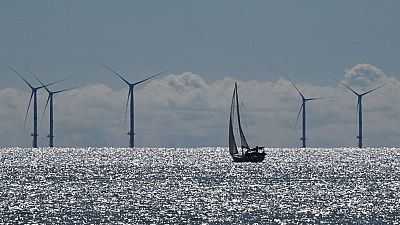 Nine countries across Europe, Asia and the Americas have joined an international alliance to develop more offshore wind energy at COP27 on Tuesday.

Belgium, Colombia, Germany, Ireland, Japan, the Netherlands, Norway, the UK, and the US signed up to the Global Offshore Wind Alliance (GOWA), which wants to ramp up wind power to tackle the climate, energy and security crises.

The alliance, initiated by the International Renewable Energy Agency (IRENA), Denmark and the Global Wind Energy Council, aims to "lift the barriers" to developing offshore.

It plans to expand wind energy "on a large scale, in a short time and at a competitive price" by bringing together governments, the private sector and international organisations.

How much additional wind power does the alliance want to create?

Wind energy currently generates 15 per cent of Europe’s electricity according to Wind Europe, supporting 300,000 jobs across the continent.

The UK is the largest producer of this kind of renewable power, though there are significant markets in Germany and the Netherlands.

The alliance aims to have a total installed capacity of at least 380 GW by 2030. One gigawatt is enough energy to power around 750,000 homes.

According to IRENA and the International Energy Agency (IEA), offshore wind capacity will need to exceed 2,000 GW in 2050 to limit global warming to 1.5°C and avoid climate catastrophe.

Today’s announcement follows an EU motion to simplify and accelerate the process of getting a permit for renewable projects.

The measures aim to unlock wind farm plans stuck in the administrative pipeline as the bloc tries to hit its 2030 target of consuming 40 per cent energy from renewable sources.

“Wind is more than competitive with fossil fuel generation, and can also provide a massive boost to investment and job creation.”

Could the wind power alliance also boost other renewables?

Offshore wind can be deployed at large scale, in short timeframes and at a competitive cost. This means it is often viewed as a fast and effective way of hitting renewable energy targets.

But other forms of clean energy are also vital to reducing our environmental impact.

Germany described the new alliance as an opportunity to transfer the country’s skills and expertise in the renewable industry to other states.

"We see an opportunity to leverage our know-how and skills at sea to help other countries build or develop their own offshore wind capacities," said German Climate Ambassador Jennifer Morgan.

She said the sea, lying between the UK, Norway, Denmark, the Netherlands and her own country, “will be transformed into a vast sustainable power station".

"With this green acceleration we can replace gas and oil faster," Straeten added.