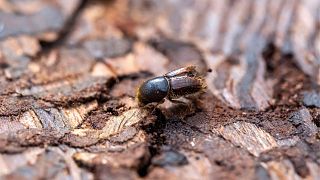 In the vast forests of Northern Italy, locals face a menacing enemy.

It’s not a bear, a wolf, or any other type of intimidating carnivore. Instead, it’s a small, innocuous looking bark-beetle.

This insect might not look like much - but it’s capable of huge destruction, chewing through millions of hectares of trees.

Armed with sustainable forestry techniques and community spirit, now locals are fighting back.

Why is the bark beetle such a threat in Trentino?

The forests of Trentino are beautiful - but they’re under threat.

The tiny beetle burrows inside trees, chewing away at their bark. The infestation cuts off nutrient flow, eventually killing the host plant.

There are more than 600 species of bark beetle. These formidable insects have decimated more than 100,000 square kilometres of forest in the Western US since 2000.

In Europe, the beetle is a scourge across Switzerland, the Czech Republic, Poland, Germany, Italy, and Slovakia.

Climate change has accelerated the spread of the threat, as droughts weaken tree defences and warmer temperatures protect larvae from the normal winter die-off.

But in Trentino, the bug is a relatively new threat.

“You could say that is the beginning point, the point-zero, for this story.”

In October 2018, the hugely destructive storm Vaia ripped through the region, tearing up 18,300 trees and wrecking infrastructure.

After two days of gale-force winds and sheeting rain, the storm subsided.

But another hazard would soon emerge.

When there is a normal amount of felled wood, ‘bostrico’ bark bugs devour the wood left on the ground, ‘cleaning’ the forest.

But in Trentino, many of the trees that survived were considerably weakened - and the bostrico sought them out.

“The insect is able to attack, stress, and kill our trees,” explains Gagliano.

“They were already sapped by Vaia, so they were weak”

Though the threat is a serious one, the locals of Trentino are fighting back.

After Storm Vaia hit, they founded the Trentino Tree Agreement - “a pact between man and trees” to rebuild the forest.

“Vaia's night was not just a calamity: it also turned out to be a proof of immediate solidarity. The repair machine started quickly,” explains the TTA site.

“Above all, however, Vaia has given us the opportunity to slow down and reflect to question ourselves on the beauty but also on the fragility of our mountains, on the relationship between nature and man, on the need to change.”

The storm - and the subsequent bug scourge - revealed the vulnerability of these beautiful woodlands.

By clearing the dead trees, workers can halt the spread of the beetle.

But forest management services are also looking to the longer term.

Rangers are attempting to diversify the types of trees planted in the forest, planting conifers and broadleaf trees alongside the vulnerable spruce.

“With healthy trees, the natural cycle will restart. We introduce more species in the forest, reduce the monoculture,” says Gagliano.

“A mixture is power.”

Anyone can sign up to the TTA, donating as much as they see fit to the rehabilitation efforts. It’s also funded by local municipal bodies for the autonomous region.

The forests in this region have been logged for hundreds of years and still account for 43 per cent of Italy’s timber output.

But they are logged sustainably, with 30 per cent of the territory under environmental protection.

The trees that are felled are done so under strict management plans. Most of the region’s forests are certified by the Programme for the Endorsement of Forest Certification (PEFC), a global alliance of organisations that certify sustainable forestry practices.

“We call it ‘close to nature’ management. We try to respect and mimic the natural processes,” Gagliano says.

“We try to find the balance between economical and ecological means.

“These are semi-natural forests - they are changed by human intervention. That is normal. But we try to respect the natural regeneration.”