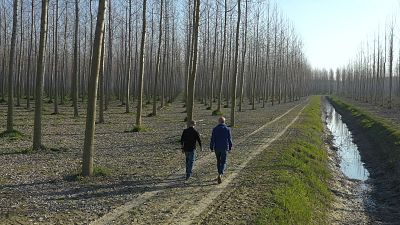 Is planting trees really an effective weapon to fight climate change? We met experts in northern Italy to hear their views in our latest episode of Climate Now. Watch the report in the player above.

But before we dive into the woods, let's have a quick look at the latest data for February from the Copernicus Climate Change Service.

Globally, February wasn't as warm as it has been for the past five years. Temperatures were under 0.1 degrees Celsius above the new 1991-2020 average.

Last month, in the heart of Europe, there was a big shift between cooler and warmer temperatures. One example of this is the city of Göttingen in Germany. It broke a new record, passing from almost minus 24 degrees Celsius on the 14th of February to plus 18 degrees Celsius less than a week later.

So, are these rapid swings in temperature a new and emerging sign of climate change? We put that question to Professor of Atmospheric Predictability from ETH Zürich in Switzerland, Daniela Domeisen.

She attributes the cold we experienced in early February as "mostly a sign of the polar vortex". She says "once that influence went away, we went back to normal temperatures, actually above normal temperatures, because that's really what the sign of climate change is".

The EU said this month that it plans to plant an extra three billion trees by 2030. Its goal is to boost biodiversity, but many people believe planting trees is an effective tool to combat climate change. We spoke to experts to see how useful it would be, and whether planting trees can really make a difference.

"When we have finished all the emission reduction and fixation options, trees are a great ally".

In the north Italian town of Cremona, the trees are just beginning to wake up from their winter slumber. From now until autumn, they'll suck CO2 out of the atmosphere every day. The amount of carbon stocked in a tree can be calculated relatively easily. A single tree can hold about a tonne of carbon.

How many new trees would you hypothetically need to plant to offset your CO2 emissions?

Fabrizio Malaggi, technical manager at Parco Oglio Sud, tells us that "on average a European citizen emits between 5 and 7 tonnes of carbon dioxide per year, so theoretically, to compensate for the impact of a European citizen, 5 to 7 trees are needed".

Not all woodland is equal when it comes to absorbing carbon though. The amount depends on the type of tree, its environment, and how the forest is managed.

The C02 absorption of young trees

Young commercial plantations like the location where our crew filmed this month's story are good carbon sinks, according to assistant professor in Forest Policy at the University of Padua, Mauro Masiero. He says that as a young commercial plantation produces timber "that will then be used for durable products. It will store carbon in these products, in this biomass. For 12 years carbon will be fixed that would otherwise be in the atmosphere".

Well-managed forests and wetlands can offer hope by storing carbon for many decades. But the experts say we need to get our priorities right. We need to stop deforestation, value the forests we already have and find other ways to cut emissions rather than relying on planting new trees.

As Diego Florian, director at FSC Italia puts it, "we shouldn't worry about planting trees because they help us to be 'greener'. From an industrial perspective, first we need to be committed to reducing emissions as much as possible, from innovating technology to adopting less polluting and better performing standards. Then we can also worry about compensating for what we can't reduce". According to Diego Florian planting more trees should not be the starting point on our fight against climate change.