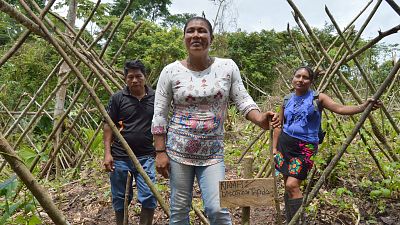 Indigenous and Tribal Peoples have been shown to be the best guardians of Latin America's forests.   -   Copyright  Paula Gomez/FAO Americas
By Rosie Frost  •  Updated: 09/08/2021

In Bolivia, Brazil and Colombia, securing land rights has allowed communities to avoid the equivalent annual emissions of taking between 9 and 12.6 million cars off the road. In the run-up to international climate talks at COP26, the knowledge these groups bring to the table has been shown to be invaluable in finding a solution to the climate crisis.

The report is the first of its kind and was released today by the Food and Agriculture Organisation of the United Nations (NAO) and the Fund for the Development of Indigenous Peoples of Latin America and the Caribbean (FILAC).

Their territories contain about one third of all the carbon stored in the forests of Latin America and the Caribbean.

It is based on a review of more than 300 studies over the last two decades and finds that these communities are generally “much better guardians of their forests” compared to other groups. It is a protective role that is becoming ever more important as the Amazon rainforest approaches tipping point.

“Indigenous and Tribal Peoples and the forests in their territories play vital roles in global and regional climate action and in fighting poverty, hunger, and malnutrition,” says FAO regional representative, Julio Berdegué.

Indigenous protection of the Amazon Rainforest

Deforestation rates inside of Indigenous woodlands, where collective land rights have been formally recognised, are up to 2.8 times less than in other areas. Almost half of the intact forests in the Amazon Basin are Indigenous territories, says Myrna Cunningham, president of FILAC.

“The evidence of their vital role in forest protection is crystal clear: while the area of intact forest declined by only 4.9 per cent between 2000 and 2016 in the region’s indigenous areas, in the non-indigenous areas it fell by 11.2 per cent.”

Indigenous and tribal peoples collectively manage up to 380 million hectares of forests in the region which store more carbon than all of the forests in Indonesia or the Democratic Republic of Congo.

The report says that, of the 404 million hectares of land occupied by Indigenous peoples, governments have only formally recognised their rights to around 66 per cent of the area. It calls on governments to strengthen the role these communities play in managing forests and compensate them for their environmental services.

Securing these land rights could have a big impact at a very low cost. It could provide a solution that is up to 42 times cheaper than carbon capture technology or storage at both coal and gas fired power stations.