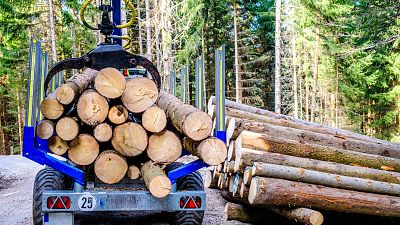 More trees do not make for a cooler planet, according to a new study in the US.

One environmental scientist argues that deforestation is not always harmful for the planet. Christopher A. Williams, a professor at Clark University's Graduate School of Geography (Worcester, Massachusetts), says that instead of warming up the Earth, deforestation can actually cool it down.

But some experts are concerned that Williams' work is likely to be misconstrued as permission to continue deforesting, which is not his intention.

It's widely accepted that our existing forests are vital carbon sinks, and the best course of action is to stop deforestation, while rewilding and reforesting areas already lost.

Deforestation contributes to climate change, can cause wildfires, desertification, soil erosion and most of all - releases huge amounts of carbon dioxide which causes global warming.

But there’s that word - ‘warming’.

While the above may be true, Williams’ new research argues that there are two factors we are not acknowledging: the significance of location and something known as ‘the albedo effect’.

What is ‘the albedo effect’?

Put simply, ‘the albedo effect’ is the process in which forests retain heat. Forests tend to be darker than other surfaces, which means they absorb more sunlight and hold onto heat, explains Williams.

As a result, some scientists believe that deforestation gets rid of unwanted heat which is contributing to global warming.

"We found that in some parts of the country like the Intermountain West, more forest actually leads to a hotter planet when we consider the full climate impacts from both carbon and albedo effects," says Professor Williams.

He adds that it is important to consider the albedo effect of forests alongside their well-known carbon storage when aiming to cool the planet.

The research team used state-of-the-art satellite remote sensing to bring an “observational perspective” to a problem that had previously been assessed mostly with computer models.

They pinpointed the locations of forest loss and identified what those sites had become - urban, agricultural, grassland, shrubland, pasture, or something else.

This is how they determined what impact deforestation had on the climate system.

So what did they find? The team discovered that for approximately one quarter of the US, forest loss causes a persistent net cooling because the albedo effect outweighs the carbon effect.

Studies like ours can help identify where the potential for cooling is greatest.

But there was a second factor at play too - location.

"It is all about putting the right trees in the right place," explains Williams, "and studies like ours can help identify where the potential for cooling is greatest."

For instance, loss of forests east of the Mississippi River caused planetary warming, while forest loss in the Intermountain and Rocky Mountain West led to a net cooling.

Should we stop planting trees?

Planting trees does a lot of good for the environment, by sequestering carbon in our atmosphere.

But Williams warns that going about planting trees willy nilly could actually have the opposite effect on the planet.

"If we fail to consider both the carbon and the albedo effects, large-scale tree-planting initiatives, such as Canada's 2Billion Trees Initiative and The Nature Conservancy's Plant a Billion Trees campaign, could end up placing trees in locations that are counterproductive for cooling the climate system," he says.

But NGOs such as Cool Earth exist to protect endangered rainforest and work alongside Indigenous communities who call it home. According to the the charity, "we depend upon the rainforest for everything," it provides us with a fifth of all freshwater and is the best carbon capture and storage technology we have.

"Keeping rainforest standing is the simplest and cheapest way to mitigate climate change," Cool Earth advocates. It is one of the "most effective actions we can take to tackle climate breakdown."

For Williams, expanding forest cover cannot be assumed to cool the planet and this is something scientists have known for a while, he says. This has not always been appreciated broadly.

The team at Clark University hopes to continue researching the topic and will help ensure that tree-planting efforts are focused in the right places in future.