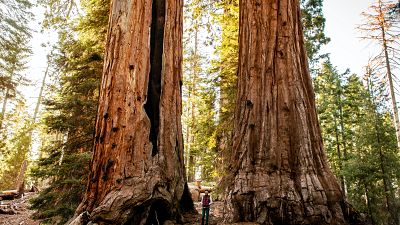 California redwoods are some of the tallest, most ancient trees on earth. Estimating their exact size, however, can be a difficult task.

Until recently, the only way of working out just how big these trees were was to climb up them, approximate using the diameter of their trunks, or cut them down. But these methods are not particularly reliable and can have a large margin of error.

Now, scientists at University College London and the University of Maryland have developed a way to calculate their total mass using lasers. It has allowed them to gain “unprecedented insights” into the 3D structure of these giant redwoods.

Among the trees scanned was the 88 metre tall Colonel Armstrong. Located in the Armstrong Redwoods State Natural Reserve in California, US, it is 88 metres tall and estimated to be over 1400 years old.

It was found that Colonel Armstrong may weigh around 110 tonnes or as much as roughly 10 double-decker buses. They discovered that these large trees could be as much as 30 per cent bigger than previously thought.

The results could help scientists to estimate just how much carbon they absorb and how they might respond to climate change.

“Big questions within climate science in response to rising CO2 levels are whether and where more trees should be planted and how best to conserve existing forests,” lead author, Professor Mat Disney said when the study was published.

“In order to answer these questions, scientists first need to understand how much carbon is stored in different tree species.”

Scientists at NASA have used this ground-based research to test and improve similar technology that is mapping forests from space.

Their GEDI project is providing information about the role trees play in the global carbon cycle. It uses advanced laser technology aboard the International Space Station (ISS) to construct detailed 3D maps of the Earth’s forests.

The mission provided its first set of data in January this year allowing environmental scientists to get a better understanding of how trees around the world are storing and releasing carbon.