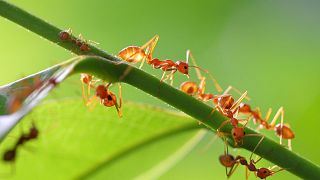 Picnickers beware - there are at least 20 quadrillion ants on earth, new research reveals.

The mind-blowing number - 25,000,000,000,000,000 - is a “conservative” estimate, according to research published in Proceedings of the National Academy of Sciences journal.

If every ant was taken and dried up, they would collectively weigh 12 megatons.

That’s more than all the world’s wild birds and mammals taken together. It’s equivalent to roughly a fifth of total human biomass.

How did researchers work out how many ants there are?

Researchers based their analysis on 489 studies of ant populations around the world. The creatures are found nearly everywhere on the planet, with the exception of Antarctica, Iceland, Greenland and some island countries.

From these local data sets, scientists were able to estimate the global ant population.

There are more than 12,000 species of ant. Tropical regions were found to harbour many more of the insects than other regions, with forests and drylands boasting more ants than urban areas.

They’ve been around for a lot longer than humans - the oldest known ant fossil is more than 100 million years old.

Why do ants matter?

If you’re squeamish about insects, the mind-boggling figure might make your skin crawl.

But ants are vital players in nearly every ecosystem.

By tunnelling in the dirt, they aerate the ground, helping water and oxygen to reach the roots of plants.

They prey on pests, move seeds around through their tunnels, and clean up decaying matter, assisting in nutrient cycling.

Given the significance of ants, it’s important that we can properly measure them.

This new study will provide researchers with a baseline to assess the impact of climate change on these important insects.

“Knowledge on the distribution and abundance of organisms is fundamental to understanding their roles within ecosystems and their ecological importance,” the study authors write.