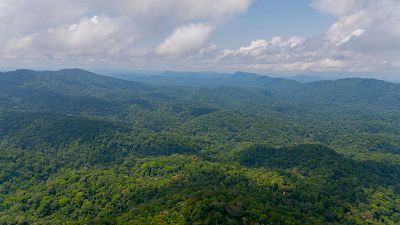 Gabon has become the first country in Africa to get paid for reducing carbon emissions and forest degradation.

The €14 million reward is based on an independent assessment of the country’s efforts to reduce CO2 emissions in 2016 and 2017.

These results-based payments are part of a breakthrough agreement between Gabon and the Central African Forest Initiative (CAFI). The 10-year deal, signed in 2019, could see the country receive almost €126 million if it meets its targets to further cut carbon emissions in half by 2025.

CAFI was launched in 2015 by the United Nations and is backed by donors including the Norwegian government.

“This is the first time an African country has been rewarded for reducing forest-related emissions at the national level,” says Sveinung Rotevatn, Norway’s Minister of Climate and Environment.

“It is extremely important that Gabon has taken this first step. The country has demonstrated that with strong vision, dedication and drive, emissions reductions can be achieved in the Congo Basin forest.”

To preserve its near-pristine rainforests, the country has created 13 national parks since the early 2000s. Since 1990, deforestation rates have historically been low in its territories - less than 0.08 per cent.

This means that reducing carbon emissions by protecting forests is a difficult task but it hasn’t stopped the country from introducing ambitious targets.

“It also paves the way for Gabon to finalise the systems that will be required to enable the country to formally sell carbon credits in the future.”

CAFI’s recognition of the country’s efforts is encouraging as they are the global reference for these kinds of payments.

The money will go towards investments in a whole host of projects to reduce carbon emissions including community forestry, scientific research and systems that support protected areas. White says that CAFI’s recognition of the country’s efforts is encouraging as they are the global reference for these kinds of payments.

“We are working with partners to develop payment mechanisms that will enable us to stabilise forests and reverse deforestation and forest degradation in HFLD (high forest/low deforestation) countries, rather than simply slowing deforestation.”