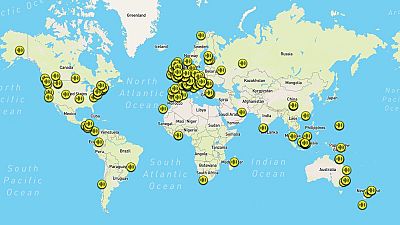 If you are missing the sounds of nature, this online project is perfect for you.

Sounds of the Forest is an open-source library of recordings which anyone can add to or borrow from. The recordings are plotted onto a map so you can explore what woodlands sound like around the world.

It was created by the Timber Festival, a three-day event in the UK that celebrates humankind’s connection to trees using art, music and creativity. With the festival postponed until 2021 and levels of noise pollution at an all-time low, its organisers decided to find a way for people to celebrate nature online instead.

“We’re incredibly excited to launch Sounds of the Forest,” say Rowan Cannon and Sarah Bird, directors of Wild Rumpus, one of the festival's partners.

“While we can’t be together in person in July, this gives us the opportunity to gather in a different way. So, wherever you live across the world, visit a woodland, recharge under the leaves and record your sounds of the forest.”

For next year’s event, Wild Rumpus plans to allow four musicians to create pieces using the recordings. This music will be released and then performed at the Timber Festival in 2021.

Taking on a life of its own

The project was supposed to end once the map was released but the innovative ways that people have been using the recordings have encouraged its creators to keep submissions open. Anyone can participate by taking a one-minute recording of their own local forest.

Submissions are accompanied by a photo of where they were taken and some users have included a short description of what you might be able to hear in the clip. From the calls of lemurs in Madagascar to evening nightingale songs in Slovakia, it demonstrates how different ecosystems all have their own unique soundscape.

One entry from Cape Kimberly in Australia details the success of a project by Rainforest Restoration which has protected an area of high conservation value rainforest from development.

Most of the recordings are currently from locations in Europe but the map is being updated weekly as more people record their local wooded areas and fill in the gaps. So far it has sounds from every continent except Antarctica.

Smog-eating paint purifies air on this giant mural in Poland

‘My poems are not nice,’ Ella Duffy on the sinister side of nature