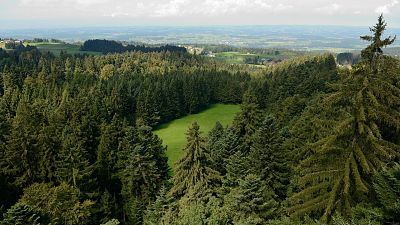 A study suggests planting more trees in Europe could increase rainfall, which could help slow down the pace of climate change.   -   Copyright  Canva
By Pascale Davies  •  Updated: 08/07/2021

It’s no secret that trees can help in the fight against climate change by absorbing carbon dioxide from the atmosphere, but they may have another superpower.

A new study suggests that planting 20 per cent more trees in Europe could also increase rainfall.

The research found that converting agricultural land into forests can have a “substantial” impact on dry conditions associated with climate change and could boost rainfall by 7.6 per cent in the summer.

“We ... conclude that land-cover-induced alterations of precipitation should be considered when developing land-management strategies for climate change adaptation and mitigation,” say the authors of the study.

The study published in the scientific journal Nature Geoscience, says that a 20 per cent rainfall increase is the right amount to help with the battle against climate change without having a negative impact on agricultural land.

Although the scientific reason for extra rainfall is not totally conclusive yet, the authors of the study suggest it could be because of the way trees interact with cloudy air.

This is because the cloudy air that causes rain usually stays longer over forested areas, which could trigger rain.

“Overall, our results highlight that [land-cover changes], such as forestation, can considerably alter precipitation in the mid-latitudes, both locally and further downwind,” says the report.

“Hence, the consequences of human land use for water availability should be considered alongside biogeochemical effects and the biogeophysical alteration of temperatures.”

How does this relate to the climate crisis?

Copernicus’ latest European State of the Climate report said 2020 was Europe’s warmest year to date, with temperatures rising by almost half a degree above previous records. And drought is one of the harmful consequences of a warming planet.

“As droughts are projected to become more severe with changing climate in Europe, the interplay between [land-cover] and water availability deserves more attention,” the Copernicus report highlights.

But the authors also say that not every European country would be able to increase its forest land by 20 per cent.

The report found that 14.4 per cent of land surface would be suitable for forestation. It noted the British Isles, Portugal, Eastern Europe, Italy and parts of France would be the most fitting areas.

According to the European Union, forests cover 37.7 per cent of the EU’s land area. The countries with the largest forest areas are Sweden, Finland, Spain, France, Germany and Poland.

Not only could trees help with rainfall and help slow down the climate crisis, but they also protect soil against erosion, form part of the water cycle and provide a habitat for wildlife.

Why America’s record-breaking night temperatures are so concerning