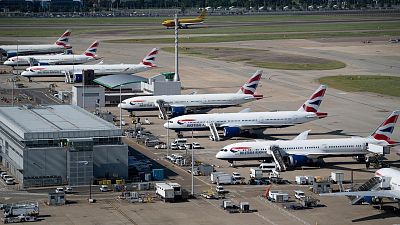 Last week, British Airways made a big deal of a transatlantic flight being powered by sustainable aviation fuel (SAF). Journalists were invited onboard and news of the London-New York flight, which marked the US reopening its borders to Brits, appeared all over the press.

But concerns have since been raised about how sustainable the fuel really is and the extent of the emissions saved.

What is Sustainable Aviation Fuel and how green is it?

British Airways, the UK’s flagship legacy airline, said the flight was powered by 35 per cent SAF. This made it the first transatlantic plane trip to be operated with this high a percentage of the alternative fuel.

Made from cooking oil then mixed with traditional aviation fuel, BA claimed that SAF “reduces the lifecycle CO2 emissions by more than 80 per cent compared to the traditional jet fuel it replaces”.

But an NGO campaigning on aviation’s impacts on people and the environment, the Aviation Environment Federation (AEF), have put forward a different point of view. The group says that at best, waste-based fuels offer a 'net' not 'actual' reduction in emissions.

If you go back far enough then you could claim that coal or oil are historically captured CO2 that are therefore net zero to burn.

As much CO2 is emitted by SAFs as by kerosene. So any emissions savings are based on what has been absorbed historically by the organic matter in the waste it is made from, AEF says.

"There’s an urgent need to cut emissions to zero now in order to try to avoid triggering tipping points in the earth’s systems, so the timeframe does matter," Cait Hewitt, policy manager for AEF tells Euronews Green.

"If you go back far enough then you could claim that coal or oil are historically captured CO2 that are therefore net zero to burn."

Can green fuels reduce methane too?

AEF also questions whether emissions of methane, a powerful greenhouse gas, can be limited by SAFs.

Claims that scientists have found a way to deliver a 165 per cent emissions reduction - based on preventing methane released by waste sent to landfills - are "clearly nonsensical," Hewitt adds.

These steps need to be delivered in addition to – not instead of – the decarbonisation of aviation.

"It cannot be better for the climate to fly than not to fly, as implied by a reduction of greater than 100 per cent. This kind of accounting hides the fact that it’s effectively crediting an offset based on avoided (potential) emissions."

"Methane generated by rotting landfill waste is of course a powerful greenhouse gas that needs to be avoided. Cutting food waste, diverting biodegradable rubbish away from landfill sites and putting in place methane capture technologies can all help to tackle these emissions.

"Critically, for the UK (and other states) to achieve net-zero, these steps need to be delivered in addition to - not instead of - the decarbonisation of aviation."

Why is cutting emissions from transport so crucial?

British Airways' flight took off last week as countries got ready to discuss the future of aviation at COP26 in Glasgow.

In the run-up to the UN climate conference, the UK published its plan to reach net-zero in all parts of the economy - including aviation. It promised 10 per cent SAF by 2050, putting £180 million (€211.3 million) behind the development of plants to create the fuel in the UK.

Prime Minister Boris Johnson said that we would still be flying in 2050 but “our planes will be zero-emissions allowing us to fly guilt-free.”

Fast forward to the conference and world leaders and representatives from 18 nations held the first meeting of the International Aviation Climate Ambition Coalition.

There they pledged that international action to reduce emissions from flights was “essential” and recognised the use of SAF as part of that plan.

But AEF says that the only way to truly reduce emissions from aviation quickly is to fly less. The NGO also believes that airlines need to be held accountable for the CO2 they put into the atmosphere, including adding aviation to each country's climate pledges.

In the long term, "internalising the climate cost of flying" in ticket prices could also help with innovation to create truly "guilt-free" flying.

New technologies such as hydrogen and electric may be the answer for short-haul flights whereas synthetic fuels made from captured CO2 or green hydrogen could work for longer routes, AEF believes.

What does British Airways say?

"We’re committed to reducing our impact on the planet and have a clear plan of short, medium and long-term initiatives to reach carbon net-zero by 2050," says British Airways.

They add that the climate accounting method for sustainable fuels has been developed internationally by climate scientists and is an agreed approach that reflects the recycling of carbon within biobased materials that happens when we take bioenergy and use it as a feedstock for fuel production. This approach is used by UK and EU regulations to approve SAFs.

"This method was recently adopted by the UN’s global climate regulation CORSIA and was developed in consultation with governments, climate experts and was a process in which NGOs, including AEF, played a role to establish these standards."