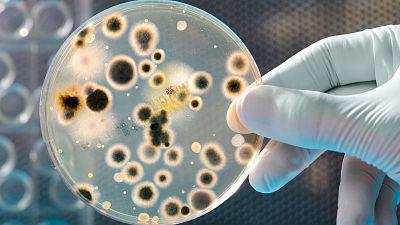 Conventional jet fuel is created by burning fossil fuels like oil and gas, generating a mammoth carbon footprint. But a tiny common soil bacteria could change all this.

The ‘streptomyces’ bacteria creates an ‘explosive’ molecule when it eats sugar and researchers claim it could be used as alternative plane fuel.

“If we can make this fuel with biology there’s no excuses to make it with oil,” says Pablo Cruz-Morales, a microbiologist at the Technical University of Denmark.

“It opens the possibility of making it sustainable.”

How can bacteria create jet fuel?

“The recipe already exists in nature,” he says.

“As [the bacteria] eat sugar or amino acids, they break them down and convert them into building blocks for carbon-to-carbon bonds.

“You make fat in your body in the same way, with the same chemistry, but this bacterial process has some very interesting twists.”

The ‘interesting twist’ is the molecule’s shape: a triangle.

“If you have bonds that are at a normal angle, an open chain of carbons, the carbons can be flexible and they get comfortable,” explains Cruz-Morales.

Molecules with a triangle shape are different. The shape makes the bonds bend - meaning that they hold a lot of tension. If these bones are broken, they release this energy, generating power.

How bad is flying for the planet?

Aviation currently accounts for about 2 per cent of the world's global carbon emissions.

An economy-class return flight from London to New York emits around 0.67 tonnes of CO2 per passenger – roughly the same amount the average person in Ghana produces in a year. For business class passengers, the emissions per kilometre travelled are about three times higher.

Now the hyperactive metabolism of a common soil bacteria could take us one step closer to guilt-free flying.

“The problem right now is that fossil fuels are subsidised,” explains Cruz-Morales.

“This is something that is not only related to the technology, but the geopolitical and socio-political constitution of the planet right now.

“We are going to run out of fossil fuels and there’s going to be a point, not far from now, when we will need alternative solutions.”