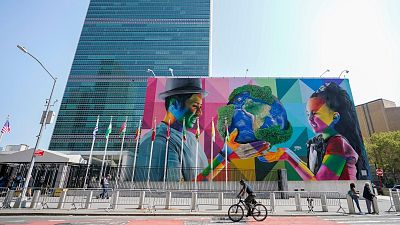 This week more than 150 world leaders are expected to come together in New York to address the UN General Assembly (UNGA).

Named the “biggest diplomatic week of the year” by the UN, it serves as a unique forum for member states to discuss international issues.

Topics at the top of the agenda are likely to include the ongoing war in Ukraine, soaring food and fuel prices - and climate change.

“The climate crisis is the defining issue of our time,” UN secretary general António Guterres said during the assembly's opening address.

“And yet climate action is being put on the back burner - despite overwhelming public support around the world.”

He highlighted that this year brought Europe’s worst heatwave since the Middle Ages, and a megadrought in China, the US and beyond, while famine is “stalking the Horn of Africa”.

With the G20 emitting 80 per cent of all greenhouse gas emissions and fossil fuel companies “feasting on hundreds of billions of dollars in subsidies and windfall profits,” Guterres says it is time for an intervention.

Here are five of the biggest climate conversations likely to top the agenda at the UN General Assembly.

On the back of Russia’s invasion of Ukraine and the resulting sanctions, fossil fuel companies have seen record profits this year.

Guterres called for all developed economies to tax the windfall profits of fossil fuel companies.

“Those funds should be redirected in two ways: to countries suffering loss and damage caused by the climate crisis and to people struggling with rising food and energy prices,” he said.

Some members have already introduced measures to try and redirect these funds to those who need them most - including the EU.

But opinions on how best to tax windfall profits from oil and gas have been deeply divided.

New UK Prime Minister Liz Truss, who flew out to the UNGA on Monday night, has ruled out this option as a way of funding her £2,500 (€2,860) energy price cap, instead opting to use government borrowing to make it happen.

In the secretary general’s opening address, he also identified renewable energy as one of the “solutions that lead to sustainable economic growth”.

“It generates more jobs, is already cheaper than fossil fuels and is the pathway to energy security, stable prices and new industries,” he said.

Guterres added that developing countries need help to make this shift in the form of international coalitions to ensure a just energy transition.

With fossil fuel prices so high, many see renewables as a vital investment to ensure cheap, secure energy sources in the future.

On Monday, the president of the 77th UNGA, Csaba Korosi, said it is more important than ever to prioritise the UN’s Sustainable Development Goals. He believes they should act as a “to-do list” for world leaders

“Key transitions need to happen. Just to name a few, a transition to a renewable energy base and to green, inclusive and digital economies, where food systems must also be transformed,” he said.

To do this, Korosi added, “We need a collective effort directed intelligently towards global goals.”

3. Funding for the world’s most climate-vulnerable countries

The Alliance of Small Island States (AOSIS) says that inhabitants of these climate-vulnerable nations are nearing their limit. During the UNGA, they want governments to show leadership in securing finance for loss and damage at COP27 negotiations in November.

“We have run out of time to waste - our islands are being hit with more severe and more frequent climate impacts and recovery comes at the cost of our development,” says Ambassador Walton Webson, AOSIS chair.

The loss of Gross Domestic Product (GDP) from tropical cyclones is now on average 3.7 per cent per year for small island states. Webson’s home, Antigua and Barbuda, is still picking up the pieces from hurricanes Irma and Maria in 2017. Altogether, that hurricane season alone cost the Caribbean a total of around €300 billion in damages.

“Where are we finding the money to rebuild? Why must our islands, which contribute the least to the emissions that cause this crisis, pay the highest price?” asks Webson.

“During UNGA77, governments must come together and pledge to make things right for our climate-vulnerable countries at COP27 with strong support for loss and damage response finance.”

At COP26 last year, UN member states pledged to “revisit and strengthen” their plans to cut emissions and keep global warming below 1.5C before the end of the century.

But so far, very few major emitters have done this, with lacklustre updates from countries like Australia and the UAE. The growing global energy crisis has put unexpected pressure on governments, with some turning back to polluting fossil fuels as a way of keeping the lights on this winter.

World leaders from Russia, China and India also aren’t expected to attend the UNGA, sending their foreign ministers instead.

As the deadline for countries’ plans to be included in this year's UN Climate Change progress report approaches on 23 September, it is likely that we will see a lot of discussion about how to cut emissions.

And with COP27 rapidly approaching, the UNGA will set the tone for negotiations in Egypt in November.

1. A legal obligation to protect people from climate harm

Vanuatu, an island country located in the South Pacific Ocean, is attempting to gather support for the International Court of Justice (ICJ) to give an advisory opinion on a country’s legal obligations to protect people from climate harm.

The idea began with a group of university students from islands in the South Pacific. They have been campaigning in New York leading up to the UNGA and now Vanuatu and its allies are expected to ask for the issue to be put to a vote at the assembly.

Though the ICJ’s advisory opinion is not binding, it does carry some legal weight and moral authority. These kinds of statements are often used to clarify laws on complex international matters.

In this instance, it would help clarify international laws around the responsibilities of governments to prevent climate change and could even make it a human rights issue.