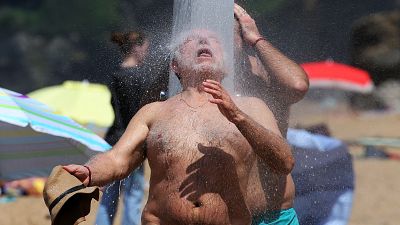 Deadly heatwaves kill thousands of people every year - but it doesn’t have to be this way, the world’s largest humanitarian network is urging.

As temperatures soar across much of Europe this week, Spain and France are sweltering under oppressive heat.

Such mercury spikes can be deadly - globally, around 480,000 people die from extreme heat every year.

Yet heatwave fatalities are not inevitable, insists the International Federation of Red Cross and Red Crescent Societies (IFRC).

“Heat waves are the silent killers of climate change, but they don’t have to be,” says Francesco Rocca, President of IFRC.

“Most heatwaves are forecast days or weeks in advance, giving ample time to act early and inform and protect the most vulnerable.”

Most heatwaves are forecast days or weeks in advance, giving ample time to act early and inform and protect the most vulnerable.

5 billion people live in places that are prone to heatwaves around the world, and where early warning systems can predict them before they happen.

How should cities prepare for a heatwave?

“The good news is that there are simple and low-cost actions authorities can take to prevent unnecessary deaths from heat,” says Rocca.

The C40 Cool Cities Network - which is partnering with the IFRC to raise awareness - has launched an “urban cooling toolbox.”

The toolbox is full of actions we can all take to improve our cities, such as increasing the amount of green space and painting roofs white. These measures help keep citizens cool.

“From Miami to Mumbai and Athens to Abidjan, mayors in our network are increasing green spaces, expanding cool roof programmes and collaborating on heat actions to improve resilience to rising urban heat,” he says.

“But far more work is needed to reduce and manage risks as the climate crisis worsens.”

So-called “grey infrastructure” can help too - such as façade shading, solar window film, cool pavements, and passive cooling in buildings.

To raise awareness of these solutions, the IFRC is launching its first global Heat Action Day today, 14 June.

The organisation is mobilising branches and partners in over 50 cities to hold awareness-raising events about ways to reduce the severe impacts of extreme heat.

“The climate crisis is driving and intensifying the humanitarian crisis in every region of the world,” says Rocca.

When cities and communities are better prepared, extreme weather doesn’t have to become a disaster or a tragedy.

“But when cities and communities are better prepared, extreme weather doesn’t have to become a disaster or a tragedy.”

As global temperatures rise, so too will the frequency and severity of heatwaves.

More than a third of all heat-related deaths between 1991 and 2018 can be attributed to human-induced global heating, research has found.

"In countries where we have the data, heatwaves are the deadliest extreme weather events. As long as greenhouse gas emissions continue, events like these will become an increasingly common disaster,” says Dr Friederike Otto, co-author of the study that calculated how climate change impacted the Pakistan drought.

Those most at risk are already vulnerable - the elderly and isolated, infants, pregnant women, those with pre-existing ailments and the urban poor, who often work outdoors or live and work in buildings without air conditioning or adequate ventilation.