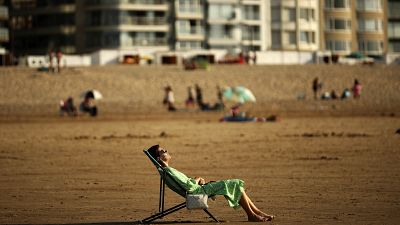 Scientists have finally confirmed the link between human-induced climate change and some extreme weather events, in a new review paper.

The research shows that human activities have a direct effect on certain types of severe weather including heatwaves and heavy rainfall.

The heatwave currently affecting Europe, for example, is likely between one to three degrees hotter because of climate change.

“I think we can very confidently say that every heatwave occurring today has been made more intense and more likely because of climate change,” says climate scientist Dr Friederike Otto, who co-authored the study,

However, the study also warns that large gaps in data from many areas in the world still conceal the full extent of climate change damage - and explains what needs to change.

The study has examined data from the last decade to understand the effects of human-caused climate change on extreme weather events.

The paper, released today in new research journal Environmental Research: Climate, looks at how climate change impacts the intensity and likelihood of these weather events.

Are heatwaves caused by climate change?

The researchers found that heatwaves and heavy rainfall are directly affected by climate change. “We have a really robust understanding of the physical mechanisms which are causing the changes in the intensity of these events,” Harrington says.

The likelihood of heavy rainfall in certain parts of the world is around double.

The study also highlights the importance of understanding how the frequency of these weather events is affected by climate change.

The paper concluded that heatwaves are becoming as much as 10 times more likely in some areas because of climate change. The likelihood of heavy rainfall in certain parts of the world is around double.

How can we measure the effect of climate change on weather?

The study also looked at how to quantify the changing intensity of weather events and understand their economic and human costs.

“We have information on floods and cyclones because historically people have been aware that they are expensive,” says Otto, “but for most other types of extreme events we actually don’t know very much about what they cost.”

The study looked at the impacts of some individual weather events, especially those less documented like heatwaves and drought. Harrington explains that the impacts of these can be more difficult to quantify and are affected by different measuring systems around the world.

According to the scientist, for events where there is comprehensive data, “we start to see some really incredible numbers come out.”

What is the cost of extreme weather events?

The authors hope the paper will lead to greater research into the costs of other extreme events which may prove even higher than floods and cyclones.

They also hope a wider range of costs is taken into account including the impact on mental health, ecosystems and agriculture.

The researchers say an understanding of the costs of extreme weather events is vital for insuring against loss and damage, funding adaptation measures, and litigating against polluters.

Are all extreme weather events affected by climate change?

The study also highlighted the extreme weather events that had little impact from climate change.

Drought and wildfires, for example, vary greatly depending on the region. “We see things like agricultural drought worsening in places where it is a typically moisture-limited region anyway, like the Mediterranean,” says Harrington.

Otto warns that in these cases, mistakenly attributing this extreme weather to climate change is a serious problem.

“We should be careful not to overestimate the impact of climate change because it takes the responsibility away from locally addressing problems,” she says. Droughts, for example, are also affected by deforestation, poverty and lack of infrastructure.

What research is needed on climate change and extreme weather?

Our understanding of the effects of climate change on extreme weather is still hampered by missing data, the researchers say. They explain that many parts of the world lack the historic observations of sufficient quality or time periods to draw conclusions.

“This study highlights what we know globally about how climate change impacts different extreme events very differently,” says Otto, “but it also looks at where we have huge gaps in our understanding and our data.”