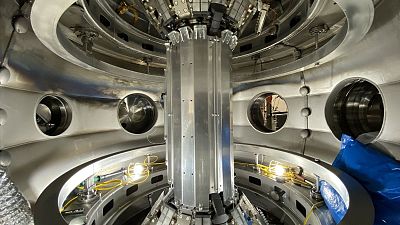 A small railway town in southern England could go down in history as the place where nuclear fusion kicked off.

The reaction process - which would generate vast amounts of low-carbon energy - has evaded scientists for decades, but a private company in Didcot, Oxfordshire says it’s now a question of if, not when.

Tokamak Energy is firing its nuclear reactor up to 50 million degrees celsius - almost twice the core temperature of the sun. By shooting 140,000 amps of electricity into a cloud of hydrogen gas, the team are trying to force hydrogen atoms to fuse, thereby creating helium.

These fusion forces are the same ones that power the sun. While there’s no danger that Didcot could become the new centre of the solar system, the industrial estate could spark the start of a cheap, clean energy supply.

“We will crack it,” CEO Chris Kelsall told the BBC on a recent trip, “the answer is out there right now with Mother Nature as we speak. What we have to do is find that key and unlock the safe to that solution. It will be found.”

Having ramped the temperature up to mind-boggling degrees, the experiment’s next step is to see if nuclear fusion can produce more energy than it uses.

In case it rings alarm bells to anyone in the vicinity, nuclear fusion is very different from nuclear fission and its associated disasters.

The process occurs inside a ‘tokamak’ - a device which uses a powerful magnetic field to contain the swirling cloud of hydrogen gas. This stops the superheated plasma from touching the edge of the vessel, as it would otherwise melt anything it comes into contact with.

If anything goes wrong inside a fusion reactor, the device just stops - so there’s no risk of this astronomical heat being unleashed.

The plasma has to be heated to 10 times the temperature of the sun to get it going, and is capable of fusing two hydrogen nuclei into a helium nucleus.

Nuclear fission, on the other hand, is the dangerous kind. This creates energy by splitting one ‘heavy’ atom (typically uranium) into two. This breakdown generates a large amount of radioactive waste in the process, which remains hazardous for years.

Fusion cannot produce a runaway chain reaction, like the one that happened at Chernobyl in 1986, so no exclusion zone is needed around Milton Park, Didcot, where the reactor is based.

Laura Hussey, an editor who works minutes away at a publishing office on the business park, says she is “really encouraged to hear how safe it is and really happy to see this big investment in clean energy.”

When will nuclear fusion become a viable source of energy?

It’s a question that scientists have been asking themselves (and have been asked by journalists) for decades. “It’s difficult,” Tokamak Energy physicist Dr Hannah Willett says, while explaining that “[we] get a lot more energy out of this reaction than out of just burning fossil fuels.”

If successful, the experiment could see a constellation of tiny suns created on Earth. Fusion energy would be a major pathway in the green transition - alongside natural sources like solar, wind and tidal. The hydrogen can be derived from seawater, meaning we have a virtually limitless supply of fuel.

Scientists have been trying to make fusion work for more than 50 years and it could still be a while before we can effectively power our homes using it.

But as governments get more serious about renewable power - with the UK investing £10 million (€11.7 million) into Tokamak Energy last year, Kelsall’s “key” feels increasingly within reach.

Meanwhile five locations in Scotland and England have been shortlisted as the potential future home of the UK’s prototype fusion energy plant - the Spherical Tokamak for Energy Production (STEP) - with a decision due around the end of 2022.

Scientists hope the power station can be wired into the national electricity grid - eventually providing energy for people’s homes, and a template to be replicated around the world.

Germany shuts down three of its six nuclear power plants