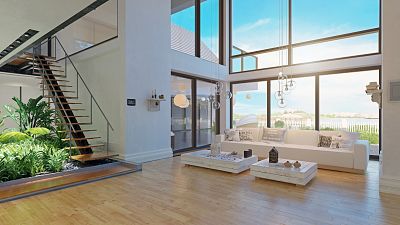 If you’ve ever touched one of your window panes in the depths of winter, you’ll know how cold they can be. Equally, in summer, south-facing windows radiate heat into our homes, creating a greenhouse effect that can be stifling.

But now, one group of scientists is looking to exploit this natural phenomenon and help save energy in the process.

Windows are one of the least energy-efficient parts of our homes and, in the US alone, window energy consumption accounts for approximately four per cent of energy usage, according to data from the US Department of Energy.

An international research team led by scientists from Nanyang Technological University, Singapore (NTU Singapore) have invented a material that might solve this problem.

The team has developed a first-of-its-kind coating that when applied to a glass window panel, can adapt itself to heat or cool rooms.

How does self-adaptive glass work?

The window coating works by exploiting the spectrums of light responsible for heating and cooling. During summer, the glass suppresses solar heat (near infrared light) while at the same time boosting radiative cooling.

In the winter, the glass does the opposite, suppressing heat loss, therefore warming the room.

The coating material contains no electrical components and is composed of layers of vanadium dioxide nanoparticles composite, Poly(methyl methacrylate) (PMMA), and a low-emissivity layer.

The research team carried out lab tests using an infrared camera in order to see the results in action.

The experiment showed that the glass allowed a controlled amount of heat to emit in various different conditions (from average room temperature to above 70C), proving that the coating reacts to changing weather patterns.

it can continuously self-tune to react to a changing temperature across all seasons.

“Most energy-saving windows today tackle the part of solar heat gain caused by visible and near infrared sunlight. However, researchers often overlook the radiative cooling in the long wavelength infrared,” says Dr Long Yi of the NTU School of Materials Science and Engineering (MSE), the principal investigator in the study.

“While innovations focusing on radiative cooling have been used on walls and roofs, this function becomes undesirable during winter. Our team has demonstrated for the first time a glass that can respond favourably to both wavelengths, meaning that it can continuously self-tune to react to a changing temperature across all seasons.”

A team led by #NTUsg scientists has developed a material coating for glass window panels that self-adapts to heat or cool rooms across different #climate zones in the world, helping to cut energy usage. https://t.co/wtkq3vTdo8#NTUsgResearch@ScienceMagazinepic.twitter.com/Op7wCPAQfm

Does energy-saving glass work in all climates?

In order to fully trial the material, the research group carried out tests in seven different climate zones around the world.

They discovered that the glass showed energy saving capabilities in both warm and cool climates as well as in different seasons.

The glass showed energy saving capabilities in both warm and cool climates as well as in different seasons.

In fact, it had an overall energy saving performance of up to 9.5 per cent - which equates to 330,000kWh per year. This is the estimated energy required to power 60 households in Singapore for an entire year.

“The results prove the viability of applying our glass in all types of climates as it is able to help cut energy use regardless of hot and cold seasonal temperature fluctuations,” says Wang Shancheng, a Research Fellow who took part in the study.

“This sets our invention apart from current energy saving windows which tend to find limited use in regions with less seasonal variations.”

The scientific makeup of the glass means that it can be customised to suit different regions and markets too.

“We can do so by simply adjusting the structure and composition of special nanocomposite coating layered onto the glass panel, allowing our innovation to be potentially used across a wide range of heat regulating applications, and not limited to windows,” says Dr Long Yi.

A Singapore patent has been filed for the innovation, but as yet no date has been announced for when the windows will be for sale.