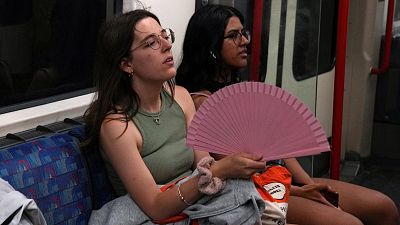 The European heatwave is causing countries to fire up fossil fuel power to cope with soaring energy demands.

Emissions from coal and gas rose sharply in the EU in July as high temperatures drove up the demand for air conditioning, according to climate data company Kayrros. Daily carbon emissions in the bloc grew by 18 per cent between 12 June and 17 July.

European countries that have experienced record breaking temperatures in recent weeks had the largest increase.

In the UK, CO2 emissions rose by almost a third between mid-May and mid-July - driven mostly by the energy sector. Sainsbury’s, the second biggest British supermarket group, has seen the sale of fans spike by 1,876 per cent in the last week.

Sales of air conditioning units have also gone up, rising by 1,420 per cent during the same period as people in the UK struggle to cope with record temperatures.

Sales of air conditioning units in the UK have risen by 1,420 per cent in the last week.

Emissions in France have risen by 72 per cent since the end of June. The biggest increase came during the heatwaves on 9 and 13 July.

Across Europe, it is an increased demand for energy that is responsible. Kayrros says the energy sector alone has seen a 42 per cent rise in emissions since the end of May.

With demand for space cooling through fans and air conditioning growing by 4 per cent every year since 2000, the climate data company says that our need to keep cool is partly to blame.

Connecting increased air conditioning use with rising emissions is a lot like the increased electricity and water consumption during half-time of a big football match. Though we don't know that everyone is going to the toilet or making a cup of tea, it is a fair correlation to draw.

And some governments already recognise the link. Countries like Spain and Italy have restricted the use of air conditioning to try and keep energy demand down during recent heatwaves.

“While the current heatwave is exceptionally brutal, it is not the first one that Europe has experienced. Unfortunately, neither will it be the last,” says founder and president of Kayrros Antoine Rostand.

“But never before have we had as much clarity in real-time on the relationship between rising temperatures, cooling demand and carbon emissions.”

To deal with “life threatening heat” he adds, we have to find sustainable ways to meet the demand for cooling and address the root cause of global warming.

“The more data we get to do that, the greater our chances to overcome this challenge.”

The problem isn’t just the growing demand for energy, however. As Europe looks to fill the gap left by Russian fossil fuels, some countries have been firing up their previously decommissioned coal power stations.

Daily CO2 emissions from coal-fired power generation in the Netherlands, for example, rose fivefold between June and July this year.

High demand for cooling is also leading to more use of natural gas - slowing down Europe’s ability to build supplies for winter. Last year's lack of pre-winter preparation was a huge factor behind the gas rally that started long before the war in Ukraine.

“Tackling this winter’s looming gas crisis, let alone breaking this vicious cycle, is a daunting task that calls for an ‘all of the above’ approach including increased low-carbon and renewable energy sources, more energy-efficient homes and demand restraint,” Rostand says.

He explains that Europe is in a transitional period as it weans itself away from Russian energy. This effort, however, is being further complicated by the use of coal and natural gas to deal with the energy demand during these “increasingly frequent and punishing heatwaves.”

Hundreds flock to the beach as temperatures soar in southern China

Want to escape the heat? Head to Europe's coolest places this week