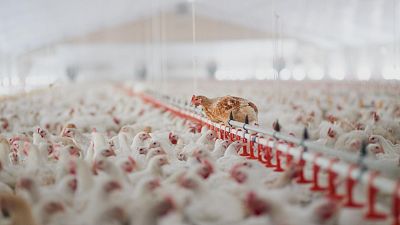 “From an early age we are presented with an idealised view of what farms are like and how animals live on them.”

World Animal Protection hopes to change that with their Factory Farm Playset. Or ‘the worst toy in the world’, as they have labelled it.

Unlike ordinary farmyard toys, the playset has been designed to show the unnatural living conditions forced upon cows, pigs and chickens on intensive farms. It even has a warning on the packaging highlighting the methane and CO2 emissions from farming that contribute to climate change.

“While 5 or 6-year-olds may not have a grasp on politics, diplomacy and global issues, they have a clear sense of right and wrong and the need to make changes,” says Lindsay Duncan, UK Campaigns Manager for Farming at World Animal Protection.

The charity hopes the 1/32 scale model will allow children “to reimagine the traditional farmyard narrative we are taught while we are young.”

What is factory farming?

It is estimated that at least 50 billion animals are reared on factory farms every year. This means they are deprived of natural light, outdoor space and sustainable feed.

These cramped conditions cause serious health problems for many animals.

Over 80 per cent of factory-farmed pigs in the U.S. have pneumonia upon slaughter, while battery-farmed chickens spend their entire lives in a cage smaller than an iPad.

Weight-gain drugs administered through feed cause chickens to reach slaughter weight after only 35 days. This process would take over 90 days under natural conditions.

How does intensive farming impact the environment?

The Factory Farm Playset not only highlights the ethical dilemmas of intensive farming, it also underlines its correlation with climate change.

"Animal agriculture is responsible for producing the equivalent of 7.1 giga-tonnes of CO2 per year – that’s 14.5 per cent of greenhouse gas emissions,” continues Duncan.

If left unchecked, agriculture is projected to produce 52 per cent of global greenhouse gas emissions in the coming decades - 70 per cent of which will come from meat and dairy alone.

“We have to have a reduction in meat eating and an end to factory farming to help avoid further damage to the climate. Eating less meat and growing crops for human beings instead of animals uses significantly less land and resources, drastically reducing emissions and taking the pressure off wild animals and their habits.”

And while the Factory Farm Playset is designed for children, World Animal Protection hopes adults will come to the same conclusion.

“We can all learn something from it to help protect the planet for future generations. We, the ‘grown-ups’, have to change our ways, and quickly.”

World Animal Protection’s ‘Say Yes to Less’ campaign is encouraging people in the UK to do their bit to put an end to factory farming by taking meat off their plates - for a day, a week, or a whole month.