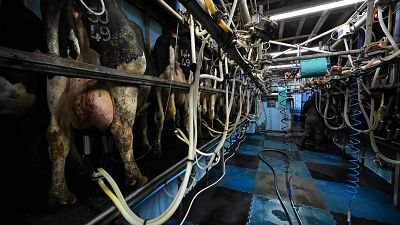 As part of a major EU study into the sustainability of popular food products, a team from Ireland recently explored the environmental impact of meatballs.   -   Copyright  PAUL ELLIS/AFP or licensors
By Elisa Allen  •  Updated: 11/07/2021

PETA UK’s Director, Elisa Allen, has penned the following piece off the back of recent research from Trinity College Dublin which highlights the importance of reducing consumption of Irish beef to curb greenhouse gas emissions.

Pair them with spaghetti. Stick them in a sub. Or, if you fancy a Swedish twist, serve them with potatoes and lingonberry jam. We’re talking about the humble meatball – a traditional staple that is both versatile and delicious.

What it’s not, according to researchers, is sustainable. But fear not, meatball lovers – there is hope.

As part of a major EU study into the sustainability of popular food products, a team from Trinity College Dublin and the University of Limerick recently explored the climate and overall environmental impact of this omnipresent spherical treat.

Notably, the research debunked the claim – often peddled by the Irish meat trade – that locally sourced beef has a smaller impact on the climate than its Brazilian counterpart. Yes, Brazilian beef has a higher carbon footprint and requires more land to produce than Irish beef. But the production of Irish beef uses more fertilisers – which run off into local water sources, reducing water quality – to cultivate grassland, and the industry generally uses more energy.

Irish beef production also emits more ammonia, which is a deadly air pollutant that poses a threat to human health. So when it comes to eating beef, in the best-case scenario, it’s a matter of choosing your poison.

When researchers compared a plant-based alternative – one made out of pea protein – and the meaty meatball, the vegan version had a lower environmental impact in every category, from land and water usage to acidification to overall impact on climate change.

But that’s not all. The study also found that the vegan version provided more fibre and nutritional density. And perhaps most impressive, the research concluded that ditching beef meatballs in favour of the meat-free alternative could cut carbon emissions by a whopping 90 per cent – a swap the lead researcher called a “win-win scenario”.

And, indeed, it is. Swapping a meatball for a vegan alternative or a beef burger for a bean burger is among one of the simplest, most effective actions we can take to combat climate change. A study at the University of Oxford concurs: it concluded that huge reductions in meat-eating – including reducing beef consumption to almost nil – are not merely desirable but essential to avoiding the worst effects of the climate crisis.

Going vegan is the “single biggest way” to cut greenhouse-gas emissions and conserve water and land.

The study also found that going vegan is the “single biggest way” to cut greenhouse-gas emissions and conserve water and land, saying the impact is “far bigger than cutting down on your flights or buying an electric car”.

Making both an environmental and ethical choice

None of this is particularly surprising when you consider the massive amounts of land required by animal agriculture – for grazing and to grow the crops that are fed to the billions upon billions of animals farmed for their flesh each year. And as a result of our current appetite for, or perhaps addiction to, meat, wild animals of every description, from koalas in Australia to macaws in the Amazon, are facing starvation and extinction as we bulldoze their homes to make way for cows who will be slaughtered for their flesh and skin or the soya beans to feed them.

There’s also the energy required to operate farms and slaughterhouses, the petrol to fuel the lorries that transport animals between them, and the electricity to freeze their carcasses.

Add to that the enormous amount of water that animals on farms drink and that is needed to clean the filthy facilities and grow crops for animals to eat and it’s easy to understand why the Union of Concerned Scientists lists meat-eating as one of the biggest environmental hazards facing the Earth.

As individuals, we can approach the problem fork-first.

It’s also why the UN says that raising animals for food is one of the “most significant contributors to the most serious environmental problems, at every scale from local to global”.

Of course, making the swap to plant-based foods is not only an environmentally sound choice but also an ethically sound one. Cows and other animals on farms are emotionally complex animals who value their lives. Like us, cows have best friends – and they become distressed when they are separated from them. They hold grudges against other cows who treat them badly, and they shed tears when their loved ones die or are taken away.

And the more we learn about them and the other beings with whom we share the planet, the harder it becomes to justify killing them for a meal.

It’s time to take heed. The ice caps are melting, and sea levels are rising. We’re seeing more frequent and more extreme floods, droughts, heatwaves, blizzards, landslides, and fires than ever before. We’re experiencing a “biological annihilation” of wildlife, as species of animals are going extinct at an accelerated rate.

The situation is critical – and the window of opportunity in which to act is fast closing. For the sake of our children’s children, we must take action now – or there won’t be a habitable planet for them to live on.

As individuals, we can approach the problem fork-first. It’s as easy as swapping the meatballs on top of tonight’s pasta dinner for vegan ones, readily available in all supermarkets. Doing so helps reduce the damage that is done to the planet – while sparing living, feeling individuals the horrors of the slaughterhouse. It really is that simple.