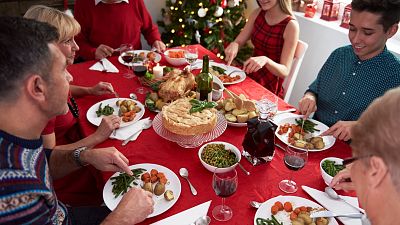 We tend to give vegans a hard time over the festive period. If yet another family member chimes in with, "but it’s Christmas, can’t you just make an exception?", they might just leave the table – and fair enough.

Cursed with the unfair reputation of being difficult dinner guests, plant-based folks often have to bring their own grub or make do with food that is not exactly...gourmet.

Yes, this is literally a slice of banana, on a plate.

A simple Google trend search shows that 'interest in veganism’ increased seven fold in the five years between 2014 and 2019 in the UK alone. The interest surpasses even vegetarian and gluten free searches.

While the evidence certainly suggests vegan diets are more popular than ever before, we wondered what the general consensus was around Christmas?

Is it worth giving up the annual turkey? What about dairy-heavy pavlovas? Pigs in blankets?

5 people tell us whether they would go vegan for Christmas:

“I have been an on/off vegetarian for about 15 years. But I would still eat meat on Christmas Day."

Megan calls herself a flexitarian and explains that while she fully supports vegans, for her, "Christmas is a day when I’d bend the rules.”

Her concerns stretch to energy use too. "I didn’t always do this but last year it struck me that my mum buying me a meat alternative, (usually a veggie pie), used more energy and was more wasteful than just eating whatever everyone else in my family was eating."

"I’ve always looked forward to all the trimmings on a Christmas dinner and have never struggled or gone hungry as people sometimes think veggies do at Xmas."

Instead, she opts for different meat substitutes every year "to make it special." In the past, she has gone for Linda McCartney vegetarian sausages or a pie. But as veggie options have multiplied in supermarkets, she now prefers alternatives like quorn chicken fillets.

She's vegetarian, rather than vegan, due to her love of cheese. Over the festive period, her favourites include cauliflower cheese, creamy dauphinois potatoes and cheese and leek plaits.

"To be honest it’s just laziness! I love cheese and chocolate & loads of wine - which is usually not vegan."

"I'm a pro-meat eater. My grandparents are farmers and my mum is a nurse who specialises in diabetes, so I was brought up to respect having a balanced diet."

Elle says she's not interested in "bashing vegans", but prefers to eat a traditional Christmas dinner. She says "there are proteins and benefits to eating meat, and especially fish, that I believe are important. I also find that if I don't eat meat then I get hungrier a lot quicker."

She doesn't believe it's a good idea to simply "switch diets overnight" and when it comes to Christmas, admits she just likes the taste of meat. "We do balance it with vegetables grown from the garden", she explains, but Christmas "wouldn't be the same" without meat.

“My partner and I are totally vegan and did vegan Christmas dinner last year for our family, who loved it. We have vegan roasts most Sundays too."

Christina and her partner Doug think Christmas dinner can be just as flavoursome without meat or dairy. "I have never missed meat in nearly 3 years", she says, claiming she makes her own Yorkshire puddings using oat milk.

Then she makes asparagus tips with a drizzle of oil "tastes like pork scratching", stuffing baked and veggie gravy. That's how vegans do Christmas.

Going vegan could save you money too

According to the vegan society, we could practically reverse the climate crisis if the world’s population became vegan. The charity claims we could save 8 million human lives by 2050, reduce greenhouse gas emissions by two thirds, leading to healthcare-related savings, and avoid climate damages of $1.5 trillion.

So from an environmental perspective, it's pretty convincing.

But if you're still feeling sceptical, money saving app Get Chip has just released a study claiming that going vegan for Christmas Day could save you a whole £56.

Buying alternatives like vegan trimming selections, nut and mushroom roasts and 'no beef' wellingtons ended up being cheaper than going for meat-heavy counterparts.

Quinoa fruit cake anyone? It's gluten free too.

Jam-packed with sultanas, apricots and cranberries, this is a great vegan alternative to Christmas cake and is crammed full of fibre.

Wondering how to bake Christmas goodies without eggs?

Here's a definitive guide offering up all the best egg substitutes, including flax seeds and half a mashed banana.

Our favourite side is coconut bacon.

Pour it over potatoes and veggie stuffing and you'll never know the difference.

This is technically a vegetarian dish but easily made vegan by using vegan pastry and oil in place of egg.

A list of vegan Christmas dinner ideas you might never have thought of and how to make them/where to buy them.

In other news, ever wondered why women are more likely to go vegan than men? We investigated.