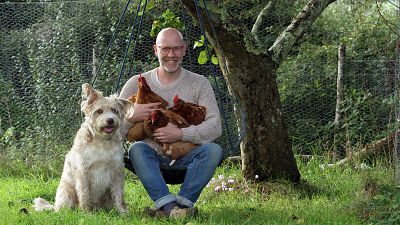 With stints in fur trapping, factory farming and manning slaughterhouses, Rich Hardy’s CV is not what you might expect from a man who’s been vegan for the past 34 years. He also counts academy-level football and lifelong activism on that lengthy resume. Oh, and surfing as a hobby.

Now he’s adding author to that long list of professions.

Not as Nature Intended is a deep dive into Rich’s time as an undercover investigator with big name animal welfare charities including Compassion In World Farming. It’s gained pre-release praise from high profile celebrities, including Moby, Joanna Lumley and even a foreword by Chris Packham.

“For twenty years, I lived a bit of a double life,” he says. “I’ve been vegan but I’ve been working undercover for animal rights groups since 1999.”

The ultimate vegan for the animals, Hardy has also been an investigative journalist. His work took him across the globe, through the Americas to film in 28 countries over more than 100 assignments. “Mostly factory farming, slaughterhouse work and infiltrating the fur industry, working with fur trappers, circuses, zoos, trailing the people that trap primates for laboratories.”

“It was a very tough time, because I specialise in infiltration and so I became friends with people who do bad things to animals and the environment. It was hard living day in, day out with them and I do regret some of things I had to do.”

He points to trapping foxes in the wilderness of North America is one of his most harrowing experiences. Especially given that he was tasked with documenting the animals’ suffering.

Rich would blag his way into these places, assimilate with the workers, become like them and carry out jobs that fundamentally conflict with his beliefs as a staunch animal rights and anti-cruelty crusader.

But when the film Okja came out – an adventure flick about the commercial exploitation of a genetically engineered ‘super pig’ – that all changed. Launched on streaming giant Netflix and screened it cinemas, it put animal rights films into the mainstream media. Though it was a cinematic action film rather than one of Hardy's documentaries, he considered his work was done with the viewing public able to witness the impacts of factory farming on animal lovers.

“I thought ‘do you know what, maybe I’ve achieved what I set out to do from an investigator’s perspective’. That trigger that had caused a lot of us to consider plant-based and cruelty-free lifestyles had come into the mainstream.”

Departing Compassion, he decided to shift focus from problems to solutions. In 2018, he became head of campaigns at charity Veganuary, which created the much-hyped 31-day meat and dairy-free challenge.

During the record-setting Veganuary 2019, he demanded former British PM Theresa May join the cause and ditch meat for January. Though the PM didn’t take up the challenge, it resulted in some recognition for the brand, and 250,000 sign-ups to the challenge. But statistics suggest as many as 10 times that figure take up the Veganuary pledge unofficially – by not signing up on the website and becoming the recipient of a host of meal plans intended to help new converts.

Following just one season though, Hardy moved on from Veganuary as the charity took its cause to a more international audience. It gives Rich more time in Cornwall, never far from a vegan Cornish pasty, where he lives with his partner Pru – also an animal rights activist with the Humane League – and their pets.

They’ve rescued dogs, cats, battery hens and even a duck named Idris – once known as Iris when his sex was a mystery. Now, eggs laid by their hens go to neighbours who’d otherwise purchase eggs from the shops, before the hens are taken to the vet to get a jab that prevents them laying in order to recover from the strain exerted on their bodies.

Hardy’s life has been dedicated to activism at the coalface. He was even CEO of Surfers Against Sewage at one point. And a lifetime of being on the frontline won’t leave you overnight. So the time at home was quickly dedicated pouring out his memoirs, of a life consciously lived in opposition to your core beliefs.

Not As Nature Intended goes on sale today. Get yours here.

What would it take for you to go green?

The biggest climate, environment and sustainability stories of 2019