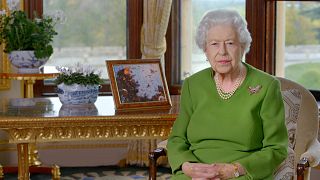 In grab taken from a video provided by Buckingham Palace on Nov. 1, 2021, Britain's Queen Elizabeth II delivers a message to the COP26 Summit being held in Glasgow, Scotland.   -   Copyright  AP / Buckingham Palace
By Josephine Joly  with AFP  •  Updated: 02/11/2021

Queen Elizabeth II has called on world leaders to "rise above the politics of the moment" and work together to create a "stabler future."

Speaking to world leaders at COP26 via video link, the British monarch did not pull her punches, saying "If we fail to cope with this challenge, all the other problems will pale into insignificance."

Follow our liveblog to make sure you don't miss a minute of the action at COP26.

The Queen is inspired by young activists

The 95-year-old monarch, who was advised by doctors not to travel to the climate summit in Glasgow, said she has taken inspiration from the "relentless enthusiasm" of young people.

"I have drawn great comfort and inspiration from the relentless enthusiasm of people of all ages, especially the young, in calling for everyone to play their part," she said.

"In the coming days, the world has the chance to join in the shared objective of creating a safer, stabler future for our people and for the planet on which we depend."

The first day of the summit was filled with dire warnings by environmentalists and scientists that the conference is the world's "last best hope" for nailing down commitments to limit the global rise in temperature to 1.5 degrees Celsius above the pre-industrial average.

"If the world's pollution situation is not critical at the moment, it is as certain as anything can be that the situation will become increasingly intolerable within a very short time...," said the Queen.

"I have drawn great comfort and inspiration from the relentless enthusiasm of people of all ages, especially the young, in calling for everyone to play their part"

Will the Paris Agreement be upheld?

COP26 is being billed as vital to upholding the Paris Agreement, which countries signed in 2015 by promising to limit global temperature rises to "well below" two degrees Celsius, and to work for a safer 1.5-degree cap.

With a little over 1 degree of warming since the Industrial Revolution, the Earth is being battered by ever more extreme heatwaves, flooding, tropical storms, and rising seas.

Governments are now under pressure to redouble their emissions-cutting commitments to bring them in line with the Paris goals.

They were also asked to hand over long-promised cash to help developing nations green their grids and protect themselves against future disasters.

"It's time to say: enough," UN chief Antonio Guterres said on Monday. "Enough of brutalising biodiversity. Enough of killing ourselves with carbon. Enough of burning and drilling and mining our way deeper. We are digging our own graves."

And it's the young who are keeping up the pressure on politicians.

Greta Thunberg says protesting is 'what leadership looks like'

Swedish environmental activist Greta Thunberg spoke scathingly outside the building where the royal reception was being held.

"Change is not going to come from inside there. That is not leadership. This is leadership (talking about the young). This is what leadership looks like."

Thunberg was joined by dozens of fellow activists carrying placards reading "We are watching you", "There is no planet B", and "We are unstoppable".

Their message to the world's leaders was to "get serious about climate change action" as millions of young people around the world describe the governments' failure to cut carbon emissions as a "betrayal".

Ending deforestation by 2030: Landmark deal or rerun of past failures?